HomeBlogAirplane Accidents Versus Auto Accidents: Which Are Worse?

Airplane Accidents Versus Auto Accidents: Which Are Worse?

Are Airplanes Safer Than Cars & Trucks? 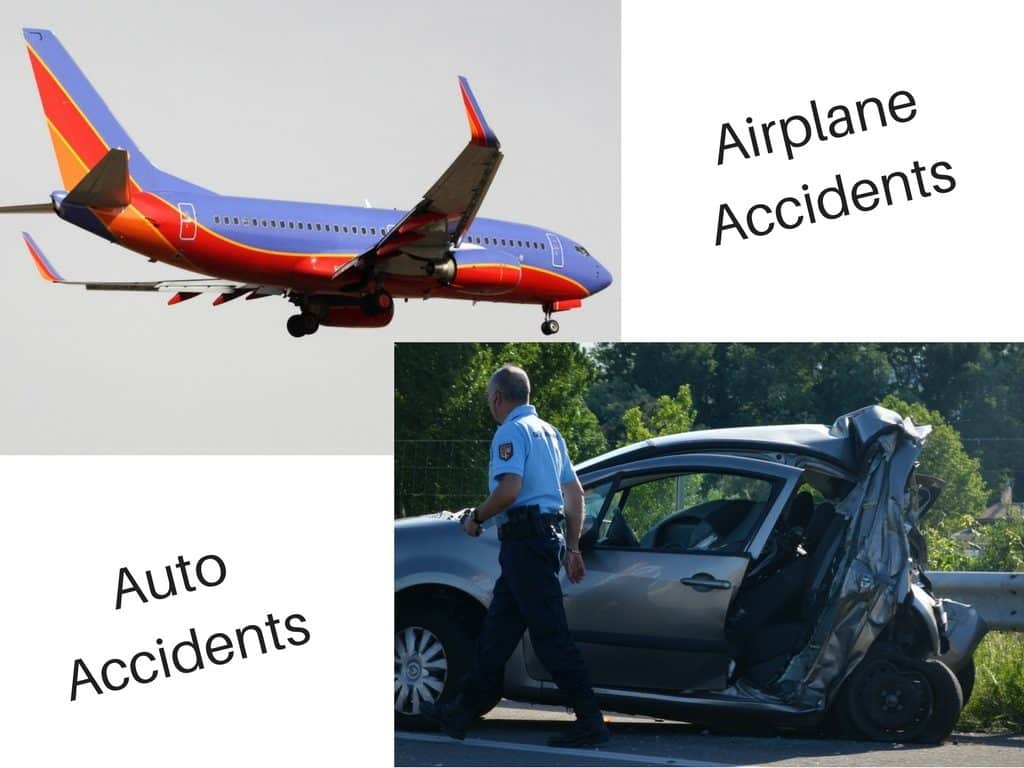 As an Orlando personal injury lawyer, the recent death on the Southwest Airlines Flight 1380 caught my attention.  This tragedy has made some people question whether traveling on an airplane is a good idea.  So I wanted to explain a little more about both airplane and auto accidents, including how we can be safer.

There are so many things non-lawyers don’t understand about corporate responsibility to prevent airplane accidents, which includes the absolute duty to inspect, maintain, and repair possibly faulty equipment before flights.  As a result, Southwest will probably have to pay millions of dollars to the family of Jennifer Riordan, who died when she was partially sucked from the window, and hefty sums to many other passengers, due to the trauma they experienced, which will likely haunt them for years with severe PTSD symptoms.

The company had an important responsibility, yet they failed to deliver a safe plane for their customers and crew.

But should that scare us away from flying? Some news reports have said that even seasoned travelers have reported some concern about the safety of flying, as a result of Southwest’s problem on Flight 1380.

Southwest is now inspecting all of their planes, to check for the metal fatigue that was the likely cause of the devastating incident on Flight 1380, and the FAA has ordered all similar planes to undergo ultrasonic testing. That should find any other planes that might vulnerable to this same problem.

Industry-wide corrective measures, after any serious accident, are one of the best things about airline travel and the governing regulations. Anytime there is an airplane accident, there is an extensive NTSB investigation, which usually results in new regulations, which increase safety for all of us. That’s undoubtedly why there haven’t been any accident related deaths aboard any airline since 2009.

How Do Accident Statistics On Our Roads Compare?

In sharp contrast, according to the Department of Transportation, more than 37,000 people were killed from auto accident deaths in 2016. That number doesn’t include the hundreds of thousands more people who were seriously injured due to car, truck & motorcycle accidents.

Think about those horrifying numbers for a minute.

2,996 people lost their lives on 9/11. For many years afterward, people were afraid to fly, and much more concerned about terrorism in general. Plus we were collectively outraged.

Far Too Few Are Worried About Safety On Our Roads

With auto accidents, most people seem unconcerned, often flying down the roads, or weaving through traffic, many times with their cell phone in their hands, or other distraction in the vehicle with them. (I’ll never forget the fatal accident involving a semi-truck driver who had been watching phone when he plowed into a standing vehicle and killed a police officer.) You can see how bad distracted driving among truck drivers has become in this video:

But truckers are certainly not the only culprits.  (And sometimes they are tragic victims, too.)

Distracted driving has become a national epidemic, and led to countless deaths on our highways.

If you haven’t sat down with your entire family and watched this important video from AT&T, about distracted driving, everyone should watch as soon as possible:

(There are actually a couple of videos in that important series. You can search “It Can Wait” in YouTube to find the others, which I recommend.)

So it is no wonder that auto accident fatalities, and catastrophic injuries, are on the rise.

(Important side note: talking on your Bluetooth can be equally dangerous.  So we must start turning our phones OFF before driving (or setting them to airplane mode), and set all GPS parameters before we turn the ignition key.)

Pedestrian & bicycle accidents have also increased substantially. That’s no surprise because drivers who are texting and driving have a bad habit of veering onto the shoulder, where bicyclists, walkers, and runners were hoping to share the road safely.

We Have To Change Our Mindset As A Society

Yet, when I drive down the road, other drivers seem blissfully unaware of the dangers surrounding them, and the resulting need to BE VERY CAREFUL.

We need to get back to the mindset of the extreme importance of cautious and defensive driving, as a community.

So What’s My Verdict Regarding Car Versus Airplane Accidents?

With that rant out of the way, obviously, the conclusion to the story is that flying is much safer than flying. As one analyst noted: “[a]viation makes driving look like an act of suicide.”

So what can we do to make our roads safer?

We can start by turning off our phones and eliminating all other distractions in the vehicle (like eating food or having a heated discussion with a family member). Next, we obviously should never drink and drive, we should prevent others from doing so whenever possible, and we should try to avoid the roads when bars are closing, or holiday parties are ending. Focusing on vehicle safety records when purchasing new cars & trucks is also important.

When flying, there isn’t much we can do, other than making sure we know how to wear those oxygen masks that so many people were appying incorrectly.  And we should obviously follow flight crew instructions whenever there is any problem (I’ve read reports of passengers recording videos, and trying to get their luggage, instead of quickly departing problem flights, for example).

The bottom line is that we all need to start taking much greater responsibility for our actions on the roads so that driving might someday stand a chance against the safety record of airplanes.