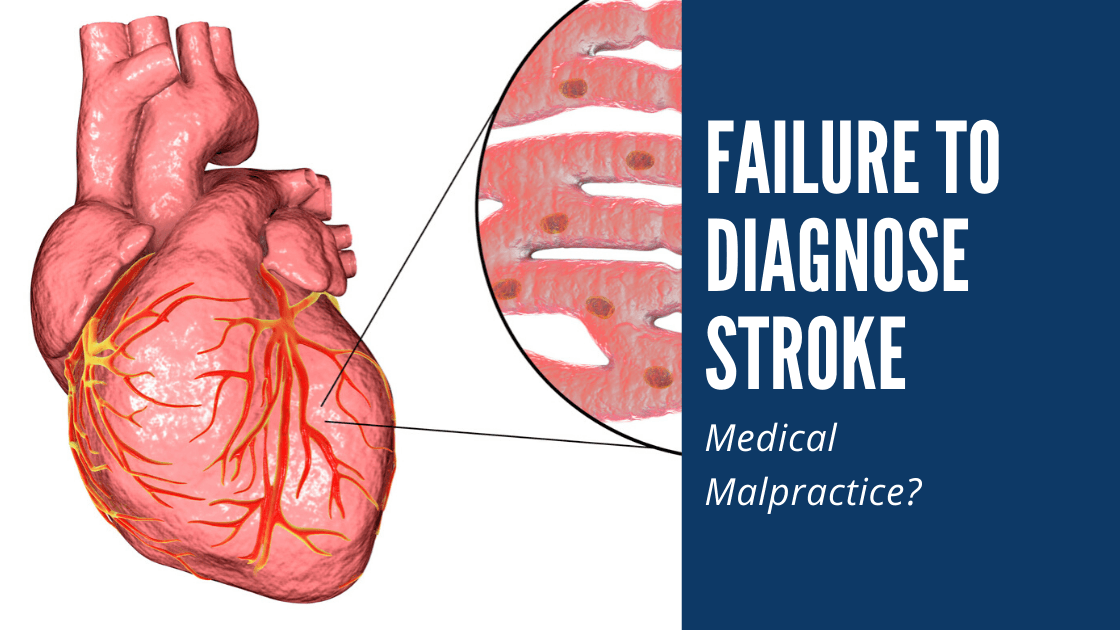 As an Orlando medical malpractice lawyer, I want to explain what happens when a doctor fails to diagnose a stroke, in legal terms. The most promising stroke treatments must be administered very quickly, within 3-6 hours. Of course, doctors cannot prevent all strokes, as sickness is an unfortunate part of all of our lives. However, in certain cases, the doctor, hospital, nurse, or other medical professional, definitely may have caused the stroke, by failure to administer proper and timely care, or failure to diagnose stroke.

In Florida, medical malpractice claims require malpractice lawyers to prove that the medical professional failed to comply with the “standard of care,” and that failure caused the patient’s injuries or death. Typically, we prove that a physician failed to comply with the standard of care by testimony from other physician experts. So, for example, in a stroke misdiagnosis case, our expert might conclude that the hospital should have administered known treatment within 3 hours, or should have referred the patient to a different facility with doctors who specialize in stroke care. If the treating physician overlooked symptoms that should have triggered further evaluation or treatment for a stroke, then that doctor definitely could be liable for the monetary damages suffered by the patient, or his or her family, if the patient did not survive.

What Is A Stroke?

Stroke symptoms can mimic many other much less serious conditions, which is one of the big reasons that doctors often misdiagnose strokes. However, doctors have a duty to fully evaluate anyone with sufficient concerning symptoms, to make sure that the patient is not having a stroke. Checking a patient’s vital signs, and sending them home with a suggestion to come back if they feel worse, is not adequate treatment for those experiencing a stroke, or TIA.

What Are The Potential Lasting Effects Of A Stroke?

Strokes can range in severity from mild to very severe, including death.

Stroke victims often struggle to regain normal life functioning, for months, years, or even the rest of their lives. Sometimes they cannot talk, walk, eat, bathe themselves, or use the bathroom. Strokes can cause permanent brain damage. As a result, those most severely injured may need a lifetime of round the clock in-home nursing care, or may need to move into an assisted living facility, or nursing home. They may also need extensive physical or occupational therapy, and someone to support them, financially and otherwise, for many years, or the rest of their lives.

This type of intensive treatment is very expensive, which is why it is critically important for those who have suffered a stroke caused by a medical professional, try to obtain compensation for the loss.

What Is A TIA? And Why Do They Matter To Florida Medical Malpractice Cases?

A TIA is short-hand for “transient ischemic attack,” otherwise known as a “mini-stroke.” TIAs are temporary strokes, which happen when the blood supply to the brain is temporarily stopped. The symptoms of a TIA are similar to a stroke. But they do not last as long (usually less than 24 hours, and often only 10 to 20 minutes). But TIAs are very important because they are really more like a warning siren that a full-blown stroke may be coming soon. Over half of all strokes are preceded by a TIA. For this reason, it is extremely important that doctors recognize TIAs, and administer the proper testing, referrals to specialists, and treatment, to try to avoid a much more debilitating severe and permanent stroke.

Many failure to diagnose stroke cases are brought against medical professionals who failed to recognize the signs of a TIA, or other early warning signs of a stroke, then failed to take the necessary steps to give the patient the best chance of avoiding a stroke.

What Are A Doctor’s Duties Regarding Potential Stroke Evaluation & Treatment?

Sometimes a doctor can prevent a stroke by proper medical treatment, including quick treatment. Doctors are obligated to:

What Are Your Legal Options After A Stroke Misdiagnosis?

Certain family members (usually spouse or children under 25) who have lost a loved one, due to medical negligence, may recover for loss of companionship, pain and suffering, lost income benefits, and burial expenses.

Is There A Deadline For Filing Medical Malpractice Cases?

Yes, there is a strict deadline, and many cases need to be investigated and evaluated long before the deadline expires. The law is complex so you should contact us IMMEDIATELY if you think that you might have a wrongful diagnosis of stroke medical malpractice case.

What Is The Settlement or Verdict Value of Failure to Diagnose Stroke or TIA?

Strokes can cause extremely severe injuries or death. For this reason, failure to diagnose stroke or TIA can be a very high value medical malpractice case. Below we have listed some sample reported verdicts and settlements involving doctors’ failure to properly diagnose or treat a stroke. Of course, all cases are different, and slightly different facts can change everything. The best way to proceed is to contact us ASAP to evaluate your serious injury or death wrongful diagnosis case.

If you have questions about your or your family member’s doctor’s failure to diagnose a stroke, please contact us anytime for your free injury case evaluation.  We have several high value, award winning Orlando personal injury lawyers on our team, who have recovered many millions for their clients.

We Are Proud Of Our Reviews