As an Orlando slip & fall attorney, many people call me about all sorts of premises liability (dangerous property) cases.  Slip and fall cases are a subset of dangerous property lawsuits.  But slip and fall cases are unique — and in many cases more difficult to prove.  If you have been injured as a result of a slip & fall, you need to speak with an attorney (not a non-lawyer intake person) who can evaluate exactly what caused you to fall.

Many clients and potential clients want to know the settlement and/or verdict amounts for slip and fall cases. You really need to understand that there is a HUGE variation, from a few hundred to many thousands or even millions in exceptionally rare and VERY SEVERE slip and fall injury cases. The value of a slip and fall settlement depends on two primary issues: (1) exactly how the fall occurred; and (2) the severity of the plaintiff’s injuries and need for medical treatment. There are many other variables but I’d say those are the biggest factors. Also, you should know that there are some things you can do to help increase the value of your slip and fall settlement.

Doctors And Lawyers Are Paid From Slip And Fall Settlement Amounts 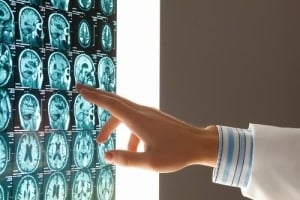 Another thing that many plaintiffs do not understand, and some personal injury lawyers may or may not tell them, is that their past and future medical treatment is part of their recovery. Additionally, if someone else paid for your medical treatment, either on credit, or via health insurance, that person or entity MUST be reimbursed from your proceeds. As the ultimate catch 22, you cannot recover much, if anything, without medical diagnosis AND treatment to prove your injuries. So, in part, your slip and fall lawyer will be working to help pay for your medical treatment. Your lawyer also gets paid a percentage of your recovery. From reading online reviews of people reviewing other firms, I know many consumers are not happy when they learn that the lawyers and doctors earn a hefty chunk of many slip and fall (or other injury or accident) cases. However, the lawyers and doctors aren’t actually to blame. That is just what Florida’s law provides, unless you can find a doctor or lawyer willing to work for free. The important thing to remember, after you understand how the law forces lawyers to divide payments, is that you are still entitled to an unknown amount for your own pain and suffering. That number can be increased if you hire a creative and thoughtful lawyer doing everything possible to make that happen. Also, we can often negotiate your medical bills down lower, so that more money goes into your pocket at the end of the case.

You should also know that there can be some SERIOUS problems with the system. Two of the biggest, from my perspective, are: (1) your lawyer does not clearly explain that how the proceeds will be divided before you settle the case, thus depriving you of making an educated choice; (2) your lawyer or doctor pushes you to receive therapy or treatment that you do not need, only to increase the medical bills; or (3) your lawyer and doctor have financial ties. In fact, there has been significant criticism of large attorney referral services for just that reason. As for me, I can just tell you that I always explain the options to my clients, I have zero financial ties to any medical providers, and I always encourage my clients to seek second opinions on medical treatment if they are uncomfortable with the provider I suggest for any reason. Additionally, I have no choice but to suggest providers because many doctors will not treat accident victims. But, if your doctor will provide your treatment, I have no problem if you want to go to them. I just encourage my clients to avoid any doctors who have an “anti-plaintiff” reputation, as is true with some local doctors. But my clients are always absolutely free to choose their own doctors. 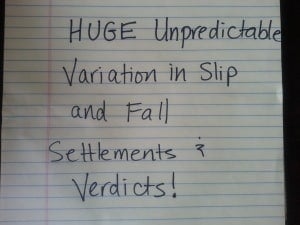 As I mentioned above, slip and fall settlement amounts can vary tremendously, depending on the degree of liability (fault) of whoever owns the property, the severity of my client’s injuries, and (sometimes) whether my client has health insurance. But here are a small sampling of settlement amounts from reported cases (not mine), just to give you an idea (note that settlements before July of 2010 involving slip and falls on spilled liquids might have a lower value today due to unfavorable changes in Florida’s slip and fall law):

On my companion website, I recently drafted a much more comprehensive summary of Florida slip and fall settlement amounts, which you can read here. Although there are many challenges with slip and fall cases, hiring an attorney who will dig into the details can make a big difference in the outcome.

Things You Must Do After A Slip & Fall Accident

How Much Money Can You Recover In A Slip & Fall Case?

You might be interested in this screen shot of a small part of my research for this blog post and a similar case that I am currently preparing for mediation (which is a settlement conference where we try resolve pending litigation). Notice that there are 9 pages of results, with 20 cases displayed per page, and each linked page has a good bit of writing. This is the kind of research you had better hope YOUR slip and fall attorney is performing (and this is just one of MANY issues that must be carefully researched and considered). If they are handling hundreds of cases, I don’t see how this type of careful legal research would even be remotely possible: