Last week, I stumbled upon a very enlightening law review article about the inner-workings of some of the largest personal injury law firms in the country, past and present, written by Nora Engstrom, a Stanford Law School professor. Ms. Engstrom performed a rare in-depth investigation of what she labeled personal injury law firm “settlement mills,” which was her descriptive title for law firms that advertise heavily for personal injury cases, and handle an astonishingly high volume of those claims. (I will borrow her “settlement mill” phrase throughout this article.) Although I am a practicing Orlando personal injury attorney, her findings even surprised me.

Which Personal Injury Firms Did She Profile?

As part of her research, she presented case studies of three huge personal injury firms from other states, which included a review of documentary and testimonial evidence from associated disciplinary proceedings, where those records existed. (And she presented evidence suggesting that all high volume, high advertising firms across the country operated in a similar fashion). She also conducted more than 50 detailed (50 minute) interviews with past and then current settlement mill attorneys and non-attorney employees. Overall, she reviewed evidence regarding eight gigantic settlement mills from seven states (none of these firms were in Florida, although she interviewed at least one Florida personal injury attorney). Together, those eight firms alone accounted for more than 7,000 personal injury claims each year, which is more than triple the number of claims resolved annually by juries in all of the nation’s federal courts.

How Personal Injury Claims Used To Be Resolved

In The Good Old Days Before Extensive Advertising Became The Norm

In the old days, Ms. Engstrom theorized, personal injury attorneys would spend a lot more time on their cases because they cared about their reputation among past clients and other lawyers (which were the primary methods for obtaining repeat clients before the advent of extensive attorney advertising). So, according to Ms. Engstrom, those attorneys had a lower case load, worked closely with their clients, and fully prepared for trial. That meant that at least more serious cases (those with more serious injuries where fault was clear) more often settled for a fair value because the threat of trial by a prepared plaintiff’s lawyer forced the insurance companies to make reasonable offers (or suffer the uncertainty of trial). In those days, past jury verdicts, combined with strong counsel arguments based on the individual facts of cases, often guided the parties toward fair personal injury settlement numbers.

“Quite critically, advertising relaxes the reputational imperative. If an attorney obtains the vast majority of his business by paid advertising rather than referrals or word-of-mouth, he need not have a sterling reputation among fellow practitioners or past clients. He requires only a big advertising budget and a steady supply of unsophisticated consumers from which to draw.”

What Did She Learn About Injury Settlement Mills?

These days, at least according to Ms. Engstrom’s compelling research, settlement mills, many of which spend an obscene fortune on advertising, handle about 90% of all personal injury cases nationwide (other smaller personal injury firms, she says, lie on a continuum in terms of case load). In the cases handled by settlement mills, again according to her research, past settlement values, with little or no regard to the nuanced and detailed facts of any given case, dictate future settlement amounts.

According to her highly persuasive data, this trend has led to a much lower overall value in more serious & higher merit personal injury cases (see chart from her article below). She also concluded that claims with less merit and/or lower value might fare better with a settlement mill. But that was only because “traditional” lawyers could never afford to take those cases (because they could not spend a lot of time working on cases that would likely result in a very low settlement). So, regarding low value or low merit personal injury cases, the relevant comparison was between clients representing themselves versus having at least some legal representation by a settlement mill. 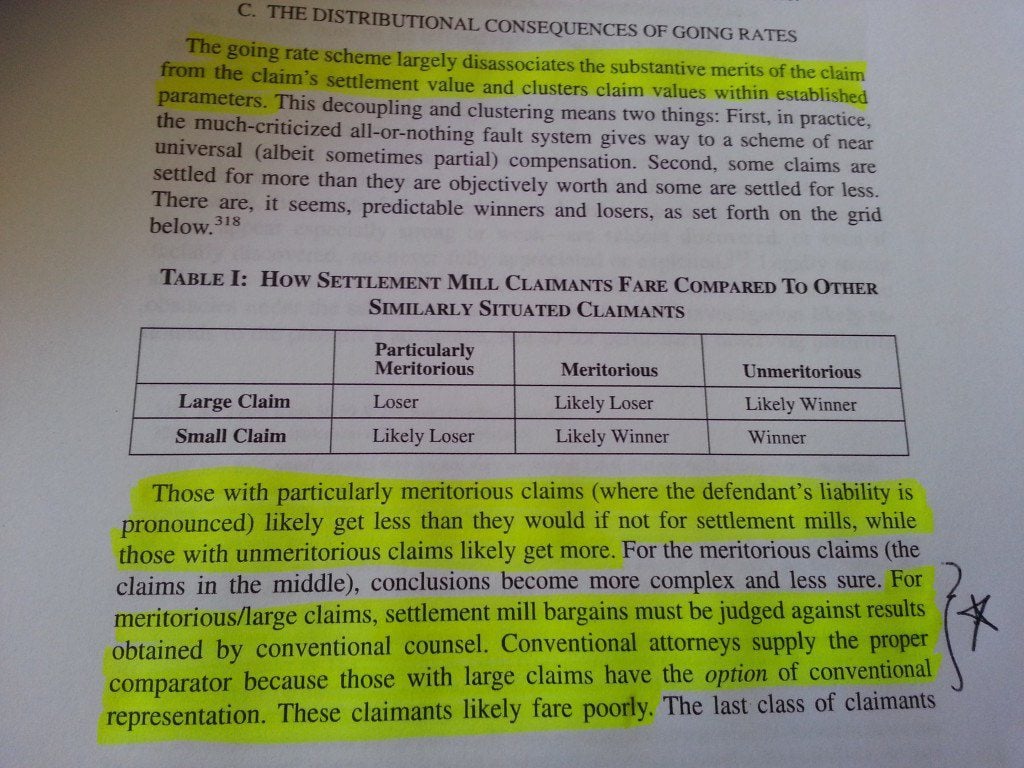 She also observed that settlement mills and insurance companies have essentially established a working norm or relationship, in which certainty of outcomes is important to both sides. As a result, she reported, settlement mills often settled the largest value personal injury claims, meaning those with the greatest potential for a catastrophic verdict, at a significant discount. She gave this hypothetical example and explanation:

In essence, she stated that the insurance companies were often willing to pay slightly more on numerous low value claims in exchange for their occasional windfall on high value claims.

Based on her research, in many of these high volume personal injury firms, the lawyers handled HUGE case loads (with numbers that truly boggle my mind). She gave estimates of these firms handling anywhere between 200 and 700 cases per attorney, depending on the particular firm. So that meant the attorneys either very rarely or never interacted with clients and simply did not practice traditional law. Instead, they often valued cases based on formulas (e.g., X times medical bills). So there really was no need for any attorney to learn the nuanced facts or applicable law regarding any given case (such as whether a particular client was credible, what witnesses reported, what documents revealed, the true extent and impact of a plaintiff’s pain and suffering, facts proving the defendant had greater fault, etc). These detailed facts often significantly increase the value of a personal injury case (assuming a personal injury attorney makes a dedicated effort to uncover and highlight any facts and/or law that would help their client). One attorney from one of the firms that she profiled amazingly admitted:

“Most of the cases I handled, I didn’t even know the facts of the case.”

“We did nothing legal.”

Did The Clients Of These Settlement Mill Firms Actually Have An Attorney? 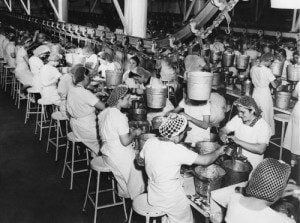 Or Were They Getting Assembly Line Justice Provided Primarily By Non-Lawyer Case Managers?

Ms. Engstrom’s research concluded that case managers (rather than personal injury attorneys) handled almost every aspect of these cases (except at least one settlement mill firm she profiled had “litigation track” and “non-litigation track” cases, where the “litigation track” cases received more attention). The bottom line was that two of the eight firms she profiled had never completed a trial in-house during the period she reviewed, while three of the other firms ranged from taking between .2 and .5% of cases to trial.

In the overwhelming majority of cases, according to her research, personal injury attorneys at these settlement mills performed very little work on their cases and prepared precious few of them for trial (the overall rate of cases that proceed to trial (in any practice area) is very low, hovering around 2%, but there is a huge difference between extensive trial preparation leading to settlement and no trial prep leading to a less favorable settlement; I do not know the extent of trial prep at these firms but the author concluded it was very low).

Minimal case preparation should absolutely NOT be normal, particularly for any case involving real injuries. Serious, meritorious cases should be given an extensive amount of time and attention by an Orlando personal injury attorney. But many clients did not know the difference, so these mills were able to achieve exponential growth despite providing sub-par representation for many of their highest value, most meritorious cases.

How Do Settlement Firms Get Away With This Sub Par Representation?

As I mentioned, clients often do not know what a personal injury lawyer should do. Additionally, Ms. Engstrom reported that many of these firms shield their practices from other lawyers, with things like employment contracts preventing them from disclosing firm case management techniques. Further, she noted, since they often do not file suit, settlement mill attorneys largely avoid the watchful eye of judges. Plus, she insisted that since settlement mills do not need to concern themselves with building a solid reputation (due to intense advertising campaigns virtually guaranteeing repeat business), even disgruntled former clients had little impact.

I have worked for large defense firms representing primarily corporations. We handled all cases individually and gave each of them lots of time and attention. Paralegals organized files but attorneys carefully evaluated the strengths and weaknesses of all cases. We did not have case managers. I had never even heard of those until I left the big defense firms. Around 2008, I interviewed for a large GA personal injury firm and was shocked when I was told the number of cases that I would handle (because I was 10000% certain that I could not do a good job on anywhere near that number of cases). I was even more shocked when the hiring partner told me that I would rarely meet clients, maybe 15 minutes when they signed up (maybe), then again during the final settlement of the claim. Without an attorney being intimately involved in handling the cases, I knew that many critically important details regarding each case would be overlooked.

Do Settlement Mills Exist In Orlando?

Or Anywhere In Florida? If So, Which Firms Employ These Methods? 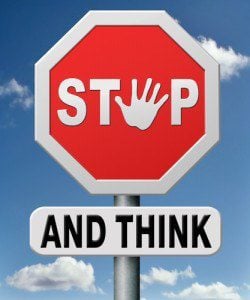 I do not have any first-hand knowledge of which, if any, Orlando personal injury attorneys or Florida firms might be handling cases in this way. Further, I would never reveal my personal opinion or suspicions, particularly without reviewing known data, as Ms. Engstrom did. Since I do not personally know the facts (as I have never worked for any firm meeting this description), I can only read and report the data collected in this article, same as you.

You’ll Have To Decide For Yourself

However, Ms. Engstrom’s article suggested that this method of handling cases was widespread nationally and took place at firms with certain dollar values for advertising budgets. If you would like to know more about her conclusions, then I suggest you read her entire 63 page article. She also wrote a companion piece with extra details, which you can find here. After reading this blog entry or her articles, but hopefully before hiring an Orlando personal injury attorney, you will have to decide for yourself. I just warn, minimally, that you should try to hire a firm where an actual lawyer will be regularly working on your case. I would consider it a very bad sign if an Orlando personal injury lawyer did not talk to you before you signed a retainer agreement, although other indicators might also sound an alarm bell in my mind.