HomeBlogWhat Happens When Someone Hits A Semi-Truck?

What Happens When Someone Hits A Semi-Truck? 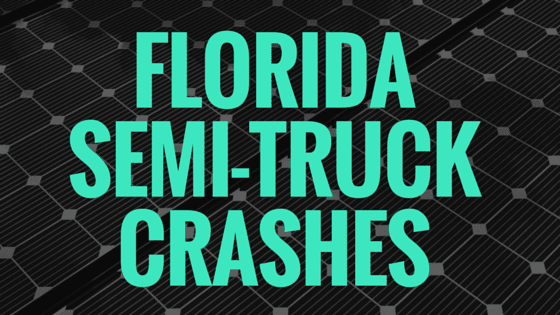 As an Orlando truck accident attorney, I couldn’t help but notice the tragic news this morning of an unusual semi-truck crash.  One semi-truck, driven by 25 year old driver Yordan Avalos-Sobrino, crashed into the rear of another semi-truck that was standing still in the roadway.  The accident happened on SR-82, at the intersection of Corkscrew Road, in Collier County, just before 7 a.m. in the morning a couple of days ago.  The driver was airlifted to Collier County Memorial Hospital by a medical helicopter.  He is still fighting for his life, in critical condition.  Our thoughts and prayers are with him, and his family.

Two Semi-Trucks Crashed Into Each Other

This accident was unusual because it involved two semi-trucks, rather than a smaller vehicle, and a semi-truck.  Still, the severity of the crash, and damage to the rear semi-truck, illustrates the power, force, and impact of these vehicles.  In other words, even another semi-truck cab was crushed when ramming into the back of another semi-truck.  You can just imagine how a car, smaller truck, or motorcycle would have been.

What Happens Inside The Vehicle Hitting The Semi-Truck?

The news reporter indicated that this crash was “so powerful, that the two semi-trucks were actually stuck together.”  You can see in the video that the interior of the cab was partly crushed, and the seat is twisted, and appears to be ripped away from the floor of the truck.  Having a seat back break, and tear away from the vehicle, is not uncommon in a powerful trucking accident.  This is caused by the many tons of steel crushing into the cab.  Also, even though this was a rear-end collision, steel parts from the trailer of the semi-truck also crushed the rear of the injured driver’s vehicle.  So, during the accident, he basically had steel crushing around him from the front and rear.  His truck cab was literally sandwiched between two massive steel objects.  And a human body, very tragically, is never any match for this kind of power and force.

Semi trucks have tremendous weight, usually something between 16,000 to 20,000 pounds. Also, depending on the speed of travel, semi-trucks might take as much as three times as long to stop than a passenger car.  For those reasons and more, semi-truck accidents are five times as likely to cause serious injuries or death than accidents between two or more smaller passenger vehicles.

Are There Any Arguments That The Front Driving Semi-Truck Might Be Responsible?

For unknown reasons, apparently the front semi-truck driver was stopped in the roadway.  Although generally rear-end collisions are the fault of the rear-driver, there are strict rules governing what a semi-truck must do when stopped in a roadway.  If the driver was not stopped for a necessary traffic stop, then he was required to have proper warning signal flashers, and then place triangles in the roadway (assuming this was daylight).

Additionally, there are many other laws that regulate semi-trucks to a much greater extent than non-commercial vehicles.  If any of those regulations were violated, that would be automatic evidence of negligence.  So establishing truck accident liability is much different, and in some ways easier, than in normal auto accidents.

Some of the arguments that would suggest the front semi-truck has some responsibility would be:

Some of the federal regulations that could lead to truck driver liability are:

What Happens If There Are No Witnesses To A Semi-Truck Accident?

One thing we don’t know is whether there were any witnesses to this crash.  Witnesses might give us a better understanding of why and how this accident happened.  If the injured victim survives, and is eventually able to communicate, then he will be able to explain what happened.  This would give Orlando truck injury attorneys a better idea of whether there could be any arguments that the front driver should have some responsibility for his injuries.  If he doesn’t survive, and his family wants to pursue a wrongful death lawsuit, then accident reconstruction experts can piece together what happened, and help determine whether the front driver might have any responsibility for the accident.

Can Both Drivers Have Some Responsibility In A Semi-Truck Accident?

In Florida, we have a truck accident responsibility system called “comparative negligence.”  That means, when deciding who might be responsible for this truck accident, any future jury could hear the facts, including expert and witness testimony, then divide blame on a percentage basis.  The fact that the front truck was stopped in the road, particularly if there were no hazard lights or triangles, might lead them to assign a significant percentage of the blame to the front driver.  If the injuries are catastrophic, any percentage of the blame could mean a lot of money in potential recovery for this truck accident victim.

What Is One Unique Problem With Semi-Truck Accidents?

If this same accident had happened with a smaller vehicle such as a car or smaller truck, the rear driver most likely would not have survived.  That can be one of the problems with serious truck accidents.  The impacts are often so severe that the victim doesn’t survive, and there are no witnesses.  So proving liability can be a problem, since there might be no one to tell us what happened.

Another Florida Dump Truck Accident In The News

This reminds me of another truck crash that was in the news last week.  In that crash, a dump truck was following behind an SUV driven by 84 year old William Schosek.  That truck accident happened on Alico Road, near Ben Hill Griffin Parkway, in Lee County.  Mr. Schosek apparently decided to make a u-turn.  You can see from the skid marks in the road that the dump truck tried to swerve, but crashed into the driver’s side of the SUV.  Very sadly, Mr. Schosek appears to have been killed on impact, or at least was not alive when Florida Highway Patrol arrived on the scene.

That case shows what I mean.  An SUV, although a large vehicle, was just no match or protection for a dump truck.  Also, I can’t know for sure. But there appear to have been no witnesses.  So, there is no one other than the dump truck driver who can tell us what happened.  What I don’t understand is why he would have hit a man performing a u-turn in the driver’s side, unless he were following him too close, and going to fast, to stop.  We can get some information from the skid marks.

How A Florida Truck Accident Attorney Can Help

The sad reality of Florida trucking accidents is that they often involve catastrophic or fatal injuries.  Families and injured victims are left to pick up the pieces of their lives, which will never be the same.  Truck accident attorneys can never help with what everyone wants most, which is to turn back the hands of time.  But, sometimes, we can at least help get compensation for victims or families who need help financially moving forward, either with lifelong medical expenses, or just living with the serious emotional trauma that such a tragedy causes.

If you have been injured in a Florida trucking accident, you can call or text me anytime, for a free consultation.  I never charge any fee until I win your case.