HomeBlogSouthwest Airlines Flight 1380: Could The Company Have Done More?

Southwest Airlines Flight 1380: Could The Company Have Done More?

Southwest Airlines Flight 1380: Did The Company Do A Good Job?

When I was reading the news this morning, I found several articles praising the pilot of the recent Southwest Airlines Flight 1380 tragedy.  Tammi Jo Shults, a former Navy fighter pilot, definitely performed well under pressure. So I’m not surprised that the passengers and crew were extremely thankful she was flying their plane. 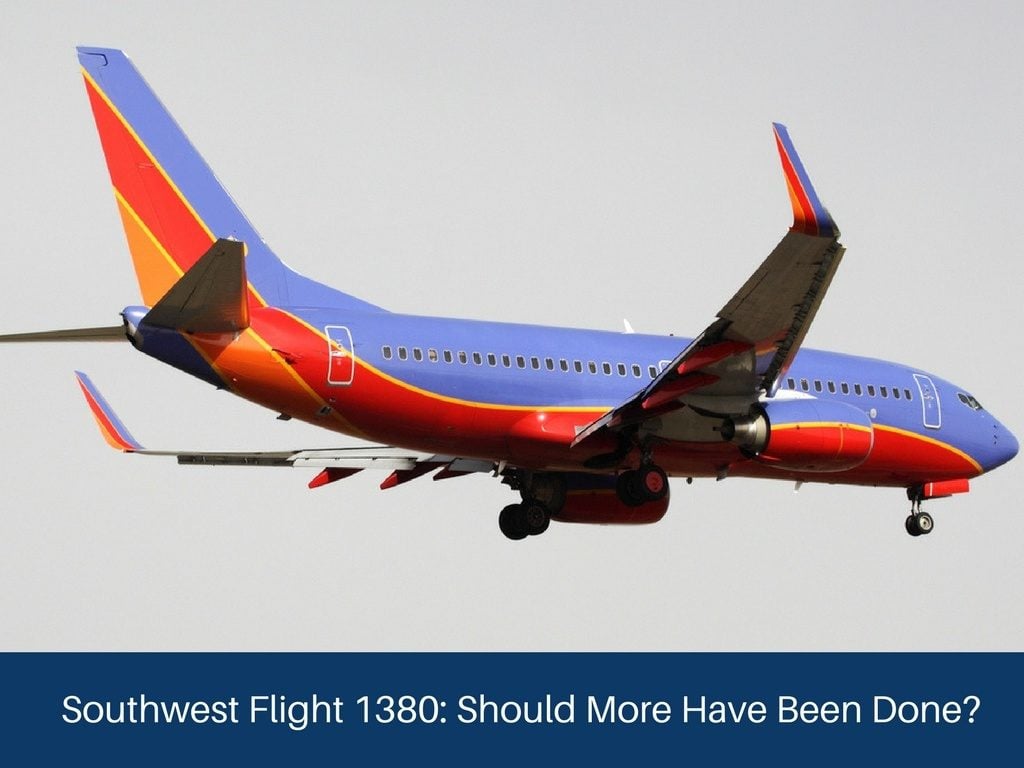 But an important point was missing from all of the praise, which indirectly became praise for Southwest (the company).

The praise somewhat ignores, or somehow minimizes, at least for me, that passenger Jennifer Riordan died, several people were injured, and many passengers reported being terrified. The passengers seemed so overjoyed that they were unaware of any potential blame Southwest absolutely might deserve because of Ms. Riordan’s tragic death.  After all, Southwest purchased the airplane, and their most important job was to maintain the parts.

Thankfully many people survived.  We have one fantastic fighter pilot to thank for their lives.  But one did not.  What if you were a member of her family right now?  Would you be happy with Southwest?

Does Southwest Airlines Deserve Praise For Their Work On Flight 1380?

To repeat, the pilot did an outstanding job.  But SouthWest has been receiving praise, albeit indirectly through Tammi Jo’s skill and courage.

But should we be praising the company, SouthWest, or asking more critical questions?

Early reports from the NTSB suggest that a fan blade had “metal fatigue,” so broke loose inside the engine, then flew into one of the passenger-facing windows, which nearly sucked the deceased passenger out into the air.  Although several passengers were thankfully able to pull her back inside, and one nurse passenger even performed CPR for the 20-minute flight back to the airport, she still died from her injuries.

Hopefully, the world will not forget too quickly that she is gone, and someone likely IS responsible for causing her death. After all, aliens did not crack that window.  Nope.  The window that sucked a woman to her untimely death was broken by airplane parts, which can, should, and MUST be tested and repaired on a regular enough basis to prevent tragedy.

If I were a member of her family or her family’s accident lawyer, I’m sorry, but I would be asking Southwest to answer the HARD questions.

Should Southwest Have Performed Ultrasonic Or Other Testing Of This Plane Before The Accident?

Southwest’s CEO has said that all of the planes in their fleet will now undergo “Ultrasonic Testing.”  Ultrasonic testing is a method of testing metal thickness and strength, using sound waves.

Well, yes and no.

The question a wrongful death attorney will surely ask if the victim’s family decides to hire one, is should Southwest have performed more thorough testing and maintenance before this tragic accident?

Large corporations have tremendous responsibilities to their customers, particularly those companies that choose to sell services that require the highest levels of safety, or tragedy is sure to result.  If we let them slide, then they have absolutely no financial incentive to do their jobs properly in the future.

What Will Wrongful Death Lawyers Want To Know About Southwest?

Wrongful death lawyers will delve deeply into the plane and parts manufacturers, as well as Southwest’s maintenance procedures and records.  They will also hire experts to evaluate whether Southwest was complying with FAA regulations and other industry standards. Maybe they did, but mechanical parts do not fail out of thin air, so to speak.

Airplane engines are made of metal parts. Those need to be properly maintained and tested.  There are many FAA regulations requiring testing (which is one of many examples why we need regulations, as a society, but I digress).

If Southwest’s maintenance department fell down on the job (which they may or may not have), then the pilot was flying an impossible mission.  She couldn’t possibly have landed everyone safely because her equipment seems to have been subpar, at least if the initial findings of the NTSB prove to be accurate.

I mean, couldn’t Southwest have performed the ultrasonic testing before this accident?  Mechanical failure is not an unexpected event. Just like your car’s engine needs maintenance, and eventually must be replaced, the same is true for airplane parts.

But sometimes businesses cut corners to save money.

The passengers on that flight, and particularly the family of the woman who died, and any passenger who was seriously injured, deserve to know whether Southwest truly did everything possible to prevent this tragedy.

If Southwest did not, then the victim’s family should be compensated for this tragic loss.  No amount of money can ever bring back a lost loved one. But the law has no other remedy to offer, unfortunately.