HomeBlogShould You Love Or Hate Lawyers?

Should You Love Or Hate Lawyers?

As an Orlando personal injury lawyer, unfortunately I inherit the depressing public attitude toward all lawyers.  Today I came across this outstanding article concluding that we lawyers need to work together to re-brand our entire profession, due to atrocious social perception.  As I said when commenting on the post, one contributing factor to that widespread, serious problem is that many lawyers in various practice areas have a high volume / low price (or, even more egregiously, high price) mentality.  Many times lawyer work is being performed by secretaries or paralegals.  I could give a long list of outrageous examples I’ve observed over the years.

Right now my husband and I are selling a house we own in Georgia.  The buyer found an attorney in GA, since we needed GA forms, and I wasn’t in the mood to hunt those down.  I could not believe the rough contract draft I received a few weeks later.  Essential terms were missing, many items on the form were blank, and the “as-is” deal to which we had agreed verbally was not (at all) reflected in the written agreement.  I just made a few edits to reflect our main concerns as sellers. We didn’t even care whether the agreement was binding because the buyers have been our long-time tenants, and we would never sue them if they didn’t close.  I didn’t worry about the rest, which I knew wouldn’t protect the buyer. (Also, I knew they didn’t need protection from us, but they could have.  Lawyers are supposed to deal with “worst case” scenarios when drafting contracts, otherwise there is no point in even having them.)  As sellers, those potential problems didn’t bother me.  I am a lawyer so I made sure what we needed was included.  A few weeks later, the buyer’s 401K company was concerned because standard real estate sales contract items were not included, such as mortgage amount, interest, and other related items.  Again, that didn’t concern us, but was profoundly shoddy legal work by the buyer’s lawyer. The holes in the contract very likely would have given us a way out of the agreement, if we wanted, which would have hurt the lawyer’s actual client, the buyer. Fortunately for the buyer, we have every intent of following through. So they had no concern with us. But, with another seller, their lawyer’s lousy work definitely could have hurt their legal interests.

Not Surprisingly, Lawyer’s Client Ran Into Other Problems

The buyer soon learned that the 401K company would not release the funds she needed for the down payment without those essential terms.  So she had to return to her lawyer, to ask him to draft an addendum.  She told him what needed to be included, in her opinion, based on the letter she received from the 401K company.  Based on whatever she told the lawyer, he included items that (1) the 401K company had not requested; (2) weren’t normal or proper for a real estate sales contract; and (3) weren’t terms a smart buyer or seller would ever agree to sign. I can’t remember them all.  But a few were “cash to close” (which were only available as estimates), “escrow’s” (spelled improperly and not identified as to who owned or held the escrow), “closing costs” (without identify what closing costs and who was supposed to pay them), and similar problematic entries.  Problem is, although this addendum was based on estimates, we would all have been bound to those numbers.

No way was I signing.

The Lawyer Was The Problem

So I had to argue with the buyer to convince her that her lawyer was an idiot.  He was the problem. He never should have drafted whatever she told him should be in the addendum. Further digging made me realize that the 401K company hadn’t even asked for those things.  (Basically, I asked her to read me their letter, which was short, plain and simple.)  The buyer thought she needed an addendum with the included items, but a quick read of the letter made me realize she was mistaken.  That process took all of two minutes.  She kept insisting that the addendum was only an estimate.  Her reasoning was that her 401K company only requested an estimate of closing costs, or cash to close. So, surely, she figured that must be what her lawyer drafted (meaning: an estimate, not a binding agreement to the estimated numbers).  The only contract terms they requested in their letter to her were: (1) purchase price, (2) loan amount, and (3) down payment amount.  They also wanted a good faith estimate of closing costs, which is a separate document in a real estate sales transaction, not part of the contract signed with the seller.  If a lawyer had read the document, then drafted the addendum, as was required, surely the lawyer wouldn’t have included estimates in a binding addendum?  The lawyer never (ever) should rely on the client to tell him what should be included in a contract, then write those terms without questioning their impact!  Reality is that this addendum probably would not have caused a problem, but it could have, so the lawyer shouldn’t have drafted it.  Actually, I’m pretty sure the lawyer’s secretary drafted the document, since I have to believe any trained lawyer would understand what I’m saying.

But This Lawyer Was Cheap!

Her final comment was “what do you expect for $50?”  I’ll tell you what you should expect.  Unlike other businesses, lawyers are legally required to perform competent work, regardless of the fee they earn. That is an unwavering ethical obligation. Our ethical rules, at least theoretically, are enforceable.  So a lawyer has a responsibility to charge what is needed to do the work properly, or else work diligently for cheap or even free (if she doesn’t charge enough).

There Aren’t Any “Simple” Cases, Despite Some Other Lawyers’ Stated Belief To The Contrary

I’m really tired of what has become a widespread high volume mentality.  I started in a large corporate defense firm where there is no way in hell any client would have received this kind of treatment.  In my practice of personal injury, every single case potentially involves complications.  Problem is, some injuries either don’t exist (are worth zero) or are very minor (are worth very little).  Still, the potentially low fee does not justify crappy work.  Sorry, it just doesn’t.  I have in my stack of things to read a law review article where a law professor suggests that lower quality / higher volume work might be okay, so long as their is full disclosure.  So maybe there is another alternative.  After all, even though there are complicated issues involved in every case (even those worth very little), a lawyer can’t work 100 hours for $300 bucks.  Yet the client with less serious injuries would still benefit from representation.  But that means the lawyer should explain the limited work she is going to do on the case, which I do, if I don’t think the injuries are serious enough to justify a lawsuit.  In those cases, my initial consults still last at least an hour (usually two), but I tell the client that I will not be doing the additional work involved in filing a lawsuit. I’m working on ways to further streamline that process by educating the client via written or video material before meeting me.  But, even if that works, my potential clients will need and deserve to have their follow-up questions answered. Moreover, this article suggests that many lawyers fall into this mindset with much more valuable cases than are justified and fair (to the client).  One way or another, lawyers are required to communicate what the client needs to know.

Personal Injury Lawyers Need To Think Outside The Box

Anyway, personal injury lawyers must be smart enough to give whatever advice is needed, at the appropriate stages of representation.  Perhaps some needed advice must be given in stages if the significance of the injury is unknown during the initial consult.  But the lawyer absolutely must give all clients some basic instructions related to case valuation, or else the client has no chance of getting full recovery.  Sometimes, I tell clients that I may explain some things later, when we know more, including their diagnosis, and how their injuries will respond to treatment.  (For example, I don’t need to explain what happens during a lawsuit when we don’t yet know whether their injuries will justify a lawsuit.)  But every client deserves to be told the importance of sticking with their treatment until their pain is fully resolved, not having gaps in treatment, the dangers of saying the wrong things to doctors, the need to collect some evidence quickly, the dangers of social media, how those problems could hurt their case, and similar issues.

A Recent Example From My Practice Area 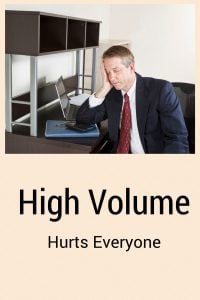 As one quick example, I was recently hired by a client who had already met with a large, heavily advertised injury firm in town.  Actually he met with one of their “investigators,” who, according to the client, told him practically nothing, other than someone would call him later (which, a month later, hadn’t happened).  I can’t reveal specific details because of confidentiality.  But he had serious injuries and surgery on one part of his body.  Assuming we establish fault, the surgery itself makes the case fairly valuable.  However, he was also having severe pain in another completely different body part.  Although that second injury could add significant value to his case, not a single person from the other law firm asked about pain in other body parts, nor told him what he needed to know, which was that he had to see a doctor ASAP regarding the additional pain, or else we would never be able to recover for those other injuries.

Lawyers Should Only Accept What They Can Do Well

The bottom line is all clients need some reasonable amount of education about how they should behave when their personal injury case is pending.  Clients with serious, or even potentially serious, injuries need to be told much more, including what to expect from a lawsuit, and the many ways an insurance company can devalue their case.  Lawyers have a responsibility to somehow communicate that information, and make sure clients understand by answering related questions.  If the case “isn’t worth it” to them, then they should pass.

End of rant.  My apologies to Orlando Attorney Don Petersen for “beating a dead horse.”

More Examples Of This Problem:

High Volume Settlement Mill Firms: The Evidence Against Them
Warning About One Major Orlando Law Firm, Which Says They Will Never File Suit
Another Major Firm That Doesn’t Advertise A Curious Partnership

Ms. Willis is a personal injury and auto accident attorney based in Orlando, Florida, although she accepts serious injury cases statewide.