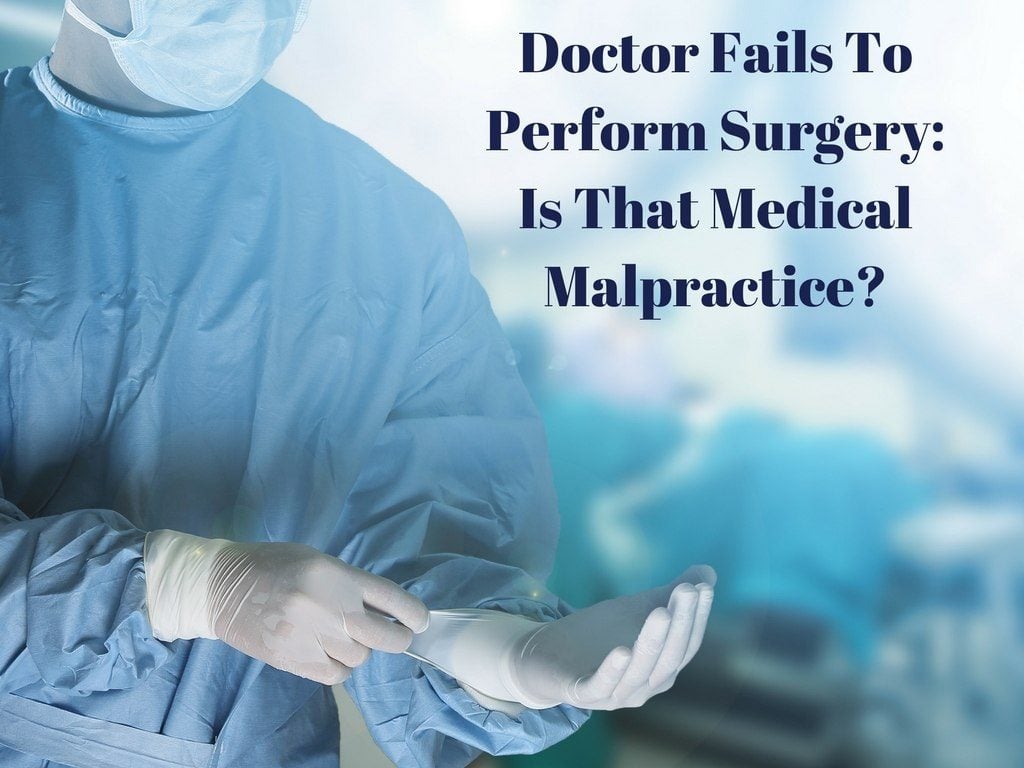 The answer is a resounding “it depends.”

First Med Mal Question: How Serious Were the Resulting Injuries?

First, as with all medical malpractice cases, we must determine how serious the resulting permanent injuries are.  In other words, we want to know what the RESULT of the doctor’s failure to perform surgery was.  If the result is “just” that another surgery was needed, and there were no permanent injuries, then most malpractice lawyers will be forced to reject the case.

(Incidentally, we do not mean to minimize the horrible outcome when someone must endure multiple surgeries as a result of doctor negligence.  But the reality is that without permanent, catastrophic injury, no malpractice lawsuit makes sense in terms of cost & benefit to the client.  This is because Florida’s legislature has placed unreasonable restrictions on the rights of malpractice victims to pursue their cases, which have led to extremely high costs for pursuing the cases (such as requirements that expensive doctor’s must be paid for pre-suit opinions).)

As a practical matter, because of Florida’s extensive & very limiting medical malpractice statutes, no malpractice case is worth pursuing unless the damages are catastrophic or deadly.  In other words, unless the victim suffered a permanent, life-altering injury, or death, most Orlando medical malpractice lawyers will be forced to reject the case.

If the failure to perform necessary surgery DID cause catastrophic injury or death, the next question is whether the proper person wants to sue.  The injured person may sue, as long as they are still alive.  If the failure to perform necessary surgery lead to wrongful death, then only certain family members are entitled to sue.  Therefore, when you call us, if someone died, we will have to ask about their age, and your relationship to them.

Third Med Mal Question: Did The Doctor Do Anything Wrong?

Assuming the person entitled to file a lawsuit calls us, and assuming the injuries are sufficiently catastrophic, the next question is whether the doctor’s behavior fell below the professional standard of care for similar doctors in the community.  To make that determination, after a preliminary review of the facts to determine whether we believe that standard was likely breached, medical malpractice lawyers often must request the medical records, then have a physician expert review the records to give us an opinion.  In short, to determine whether a doctor did something that a doctor shouldn’t do, we often ask another doctor.  Indeed, to file a medical malpractice lawsuit, we are required to provide an affidavit (which is a sworn statement under oath) from another doctor.

Quite often people calling us have spoken with another medical provider, who told them that a doctor should have performed surgery.  Sometimes the failure to provide surgery, or a timely surgical consultation, can lead to permanent catastrophic injury or death.

Bottom Line: We Need To Carefully Evaluate Lots of Facts

The bottom line is that whether failure to perform a necessary surgery would justify a medical malpractice lawsuit is an extremely fact-intensive question.  In other words, we have to learn a whole bunch of facts to determine whether a lawsuit would be justified, anytime a doctor fails to perform necessary surgery.

If you believe that your doctor, or your loved one’s doctor, negligently failed to perform necessary surgery, please give us a call to discuss your case at no cost.  We never charge any fee until & unless we recover money for you.

Why Should You Hire Tina?

What Is The Value Of Your Med Mal Case?