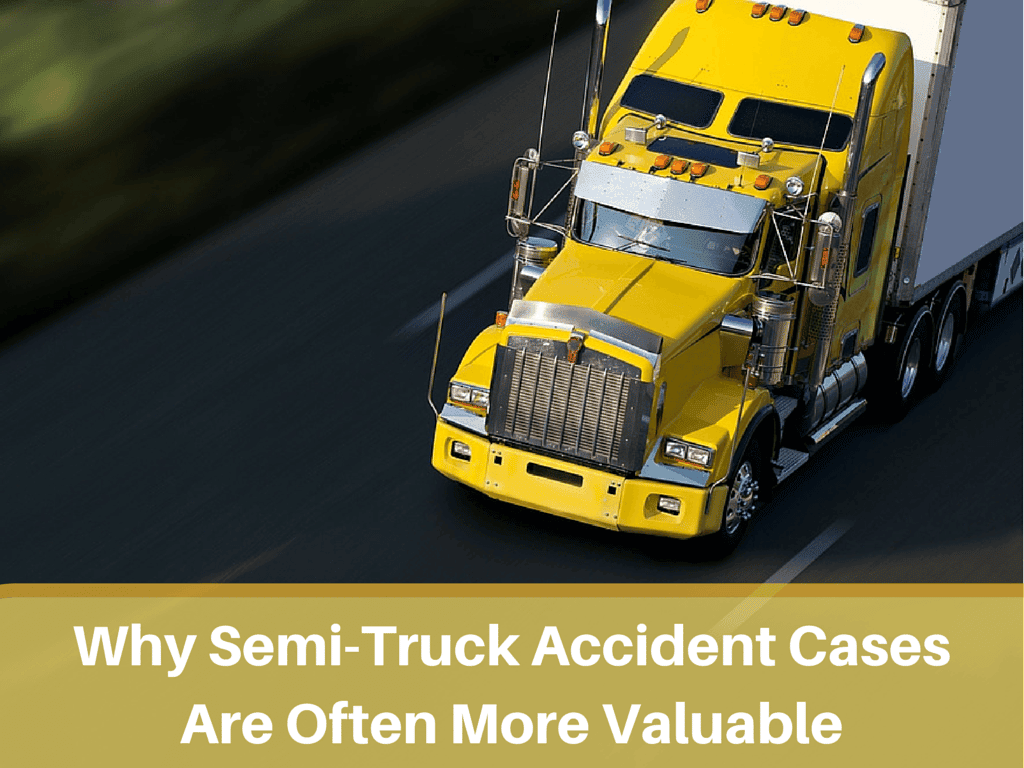 As an Orlando truck accident attorney, two accidents in the news gripped my attention.  I wanted to explain what happened, then explain special rules that apply to truckers, as well as the reason semi-truck accidents often lead to a higher financial recovery for injury victims than other accidents.

First, one of the most unbelievable accidents I have ever seen involved an 18 wheeler on I-75, with a driver from Florida.  Long story short, this tractor trailer came upon a line of traffic that was stopped in a construction zone.  He basically plowed down numerous cars, and killed 6 people, including 2 children.  After the accident, the National Transportation & Safety Board, along with the local police department, both began expansive investigations into the cause of the accident.  They will be performing drug testing, and also carefully reviewing the driver’s federally required logs, and everything else about his background.  According to police reports, they have already learned that his driving hour logs were fudged.  That’s a violation of federal safety regulations.  There are additional bad findings against the driver, such as his failure to take a required drug test in the days before the crash, and the investigation is ongoing.

Second, and also horrific, was a tractor-trailer accident involving another Florida driver.  In that case, a semi-truck plowed into a group of motorcyclists sitting on the side of the road.  Investigators speculated that he might have fallen asleep at the wheel, and drifted into the unaware pedestrians.  Tragically, two people lost their lives.

Yes, truck drivers must comply with strict and extensive regulations by the Federal Motor Carrier Safety Administration.  These rules generally involve driver medical requirements, drug and alcohol testing, working hour limits, hazardous materials, and cargo securement rules.  Anytime a semi-trailer accident causes serious injuries or death, whether these rules were violated, and contributed to the injuries, becomes a central feature in the litigation.  Although these regulations are extensive, and complicated, they actually help trucking attorneys prove liability in trucking accident cases.  The reason is that violation of them is admissible to prove, without debate, that the driver violated his duty of care to other people on the road.

Additionally, the normal rules of the road are also considered.  Just like every other driver on the road, truck drivers are required to follow basic road rules.  If they violate those, regardless of whether they violated the federal regulations, they are still on the hook for any injuries they cause.

Because truckers must comply with many more regulations than regular drivers, there are many more opportunities to prove that they violated rules.  That can mean higher opportunities for victim compensation of semi-truck accidents.

Are Semi-Truck Companies Liable For Accidents Caused By Their Drivers?

This question gets somewhat complicated, and involves a study of the relationship between the drivers, and the semi-truck company.  There is a doctrine in Florida that holds companies responsible for the acts of their employees, within certain parameters.  There are more complicated rules regarding independent contractors, and agents for any company.  I remember a hotly contested agency motion for summary judgment that turned on a careful analysis of invoices, and many other documents, to establish that the trucker was an agent of a richer company.  But company liability is never a given, and always depends on the actual connection or relationship between the trucker, and the company.

Because trucking companies might be liable, that can lead to higher compensation for victims of semi-truck accidents.

Are Commercial Trucks Required To Have Insurance? If So, How Much?

Federal law requires trucks that drive across state lines to carry a minimum amount of insurance coverage.  Plus, many states also have minimums.  These laws were put in place to make sure truck accident victims are able to recover money for their injuries.  Federal law applies to commercial trucks, and varies depending on weight, and cargo.

The minimum coverage for trucks that weigh more than 10,000 pounds is:

The minimum coverage for commercial trucks that weigh less than 10,000 pounds is:

Commercial trucks are required to have much higher insurance than regular vehicles because the size, weight, and construction of trucks makes it much more likely that any accidents will cause serious injuries to those involved.  That means you can actually get a lot more money from any trucking accident, than you could get from any other type of accident, on average.  Typically there is “deep pocket” funding for any commercial truck accident victim.

What Are The Florida Insurance Requirements For Commercial Trucks?

Florida also has statutory insurance requirements for commercial trucks.  Those are:

Never Deal With A Trucking Insurance Company Without A Lawyer

Because of the larger amount of money involved, you should never deal with any insurance company without a lawyer.  (Dealing with an insurance company is never a good idea if you have serious injuries.  But this is even more true for larger truck accidents.)

The financial stakes are higher, so they fight even harder.  Their goal is to lose the least amount of money possible.  Their adjusters are fully trained to accomplish that goal.  That means, with rare exceptions, they will offer you far less than you should take to settle your claim. They also have highly skilled attorneys working for them, to help reduce their costs.  Their profit making goal requires them not to pay as much as they should for accidents.  They will try many approaches, including being nice, sounding concerned, and offering to pay immediate medical expenses.  Meanwhile, during conversations, they will try to get you to say things that hurt your case, either about how the accident happened, or your injuries.  You would be AMAZED at the innocent statements that could hurt your case.  Since they can testify against you, you shouldn’t discuss any aspects of your case with them.  Bottom line: don’t fall victim a second time to insurance company tactics.

What Happens When Someone Hits A Semi-Truck

Why Hire Tina For Your Trucking Accident Case?