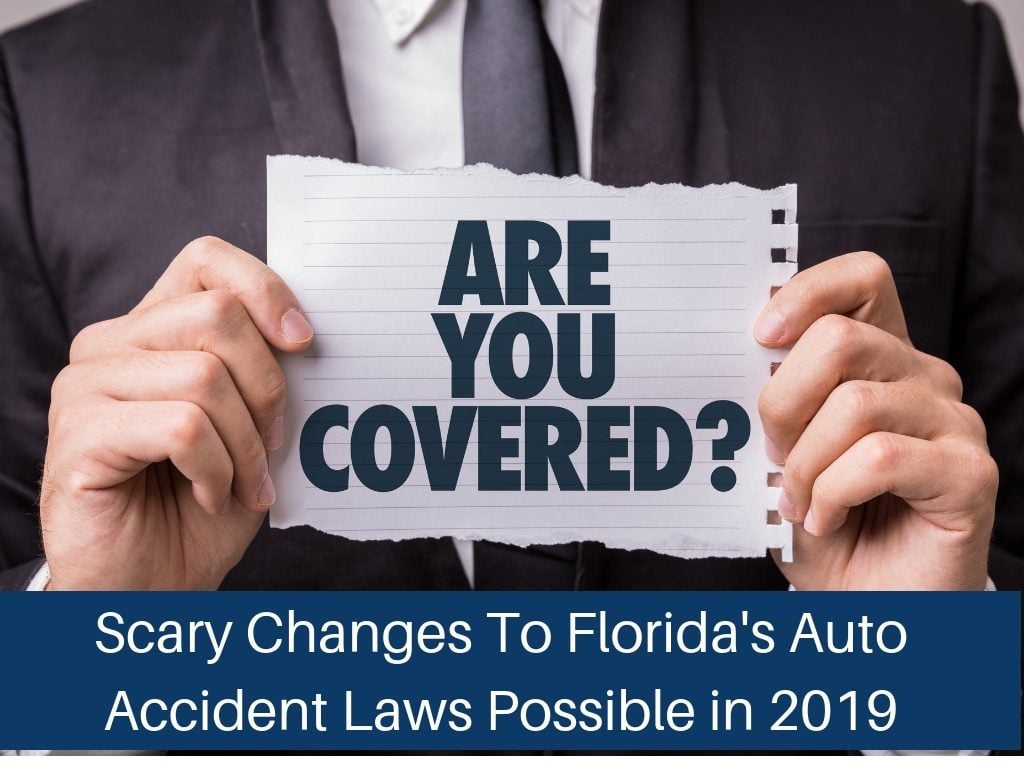 Most people who have never been victims of any accident have no idea how Florida laws might impact their potential auto insurance claims.  Unfortunately, over the last 20 years, conservative Florida lawmakers have directly targeted injury victims by passing many laws designed to weaken the value of accident cases.

As a result, the insurance lobby has been licking their chops after the 2018 midterm election, because conservative lawmakers have always supported their efforts to curb victim rights in court.

This same insurance industry lobby recently published a white paper, detailing the legislative changes that they want from the Florida legislature in 2019.  They make their goals sound lofty — to reduce insurance premiums for all Floridians. Who could argue with a reduction in premiums?

How Florida Insurance Companies Have Targeted Accident Victims For Years

Well, once you’ve advocated for an accident victim, you start to understand the much more tragic side of the story.  Since the mid 1990’s, insurance companies have enjoyed crazy high profits, helped along by an industry-wide policy of “delay, deny and defend.”  There is a lot of evidence about the insurance industry changes, which hurt consumers, starting around 1993. Some high profile lawsuits revealed insurance industry secrets, including things like how insurance companies required their adjusters to devalue accident victim claims on a massive scale, and created industry-wide software that significantly lowered accident victim payouts, regardless of case merit, and other similar case-devaluing techniques.

They have achieved their end result, which was to increase shareholder profits, by complete and total lies about widespread “frivolous” lawsuits, all the while attacking the claims of the most seriously injured victims, because their claims are always worth the most.

These insurance industry tactics mean you might pay your insurance bill for many years.  Then have your claim denied, or greatly devalued, if you are ever injured. That leaves you with no choice but to hire a lawyer, even though paying a car accident lawyer shouldn’t be required. Even we lawyers have had to change our approach over those years — claims that previously could have been settled out-of-court now require a couple of years of litigation.

Because we have already been fighting conservative laws for many years, Florida’s accident victim laws were already anti-victim, compared to most other states.

After the 2018 midterms, the insurance companies want a variety of additional changes to some obscure Florida laws.  If you aren’t a lawyer, you probably will not know how those might impact future claims. This complexity helps the insurance industry’s agenda because, when people don’t understand the inner-workings of the technical legalities, the insurance industry can (and will) exploit victims without most people having the first clue what’s really happening.

The reality is that many types of auto accident lawsuits, which are the only way victims currently get what they deserve from these cases, could largely disappear in the coming years.  My prediction is, after conservative judges are appointed to Florida’s Supreme Court, and a Republican administration and Congress take over, Florida personal injury and accident lawyers will be forced to pursue a narrower and narrower class of cases.  That means many victims will have not be able to find a lawyer after they are injured, even seriously injured, and need legal help.

Next year, the insurance lobby will pursue various complicated reforms.

The first involves changes to something called bad faith law in Florida.  This is a law that requires insurers to settle claims in good faith.  If insurers do not act in good faith during the claims process, then, under current law, the best Orlando personal injury lawyers file lawsuits, and sometimes recover more than the policy amount.

As a more specific example, let’s say an at-fault driver has a $100,000 auto insurance policy, and clearly caused an accident.  Then this driver injured someone in another vehicle, who suffered a tragic spinal cord injury leading to paralysis. Since paralysis requires a lifetime of medical care, this claim would easily exceed 100K.  In those cases, under current law, the insurance company would be required to handle the claim in good faith, meaning settle the case for 100K very quickly. If the insurance company failed to do so, then they could be sued potentially for millions of dollars (meaning the actual value of the case) because they failed to settle when they should have.

Bad faith cases are rare, relative to the number of auto accident cases in Florida.  However, the bad faith laws are the only real threat the best Orlando car accident lawyers have against insurance companies.  Without bad faith, most auto accident cases would settle for far less than they currently do (which is already never enough, largely because far too many people are driving around without enough insurance coverage, which is another way conservative laws have hurt accident victims).  Not surprisingly, after the 2018 midterm elections, the insurance lobby, supported by conservative lawmakers, has quickly moved to try to dismantle this critical legal protection for Florida consumers & auto accident victims.

In addition to changing bad faith laws, the insurance lobby wants to reduce medical payments from auto accidents, from what medical providers bill auto accident patients, to what they actually pay. This sounds reasonable enough.

However, the potential gap between what medical providers bill, and what they pay, is part of how auto accident victims get money in their pockets after accidents (rather than just having their bills paid — which is totally unfair because paying their bills, and nothing else, does nothing for their pain and suffering — especially considering auto accident victims must reimburse medical providers for any medical bills, from their insurance settlements or verdicts).

The personal injury lawyers’ lobby tried during last year’s session to get Florida lawmakers to pass a requirement that Florida drivers carry bodily insurance (“BI”) coverage.  BI coverage is required in many other states, but not Florida. Under current Florida law, drivers are not required to carry one penny of coverage for any drivers they injure. That often results in tragically unfair results for accident victims, because, unless the driver who injures them has sufficient insurance coverage, there is no way to get victims the money they deserve.

In their recent white paper, the Florida insurance lobby made clear they would not support that much needed reform (to require bodily injury insurance coverage in Florida), under the new Republican administration.

The insurance lobby also wants to further erode what are already horribly unfair odds of having a successful medical malpractice or workers compensation case in Florida.  Florida medical malpractice lawyers, as a group, are already forced to reject 99+% of med mal cases, and most stopped accepting workers’ comp cases years ago, with a few narrow exceptions.  Those laws were already far too anti-victim, resulting in tragic results where catastrophically injured people couldn’t file suits, or get any legal help at all.  Lawyers have been forced to reject these cases in record high numbers, for many, many years. Now they want to cut even more from victims. Sadly, they will probably get their wish.

At Tina Willis Law, we currently must reject a very high number of cases from people who call our office, largely because insurance laws in Florida are already so anti-victim.  I do not say this lightly and, when discussing the law, I absolutely strive to make impartial & accurate statements. Regardless of whether Democrats or Republicans control our government, I want whatever is best for accident victims. But I honestly and very seriously fear this new administration could put the nail in the coffin for 99% of injury victims, over the next few years.  In other words, I fear a future where 99% of auto accident victims will get pennies on the dollar, because they will not be able to find lawyers to take their cases (because these laws will destroy the value needed to justify the time and expense of lawsuits). Most other Florida injury attorneys feel the same way.

We will continue to represent as many accident victims as we can, until and unless the laws make bringing a successful case impossible. That absolutely might happen in the near future, but hasn’t happened yet.  Going forward, we’ll just have to wait and see.

Why Insurance Companies Do Not Pay Auto Accident Claims Quickly

How Has Tort Reform Hurt Consumers?