As an Orlando cancer misdiagnosis lawyer, the first example that always comes to mind is my husband’s father.  He was growing older, and had been married to my mother-in-law for over 50 years.  But he was the picture of perfect health for his age (82).  He took no medications, was slim and strong, ate a healthy diet, still worked daily, was very active with gardening and other house building projects, traveled often, and had essentially no health complaints.  He was 82 when his wife started urging him to get a small spot on the back of his neck checked.

Cancer Misdiagnosis On The First Go Round

The really sad part is that he did exactly what he should have done.  He went to the doctor.  And not just any doctor.  A dermatologist.  He showed the doctor the spot on the back of his neck.  The doctor examined it, and said it was nothing.  He sent him on his way.

Several months later, the spot had grown larger.  So again he went back to the same doctor, and was told that he had melanoma.  The doctors performed immediate surgery to remove the tumor.  This procedure left a gaping “doughnut” sized hole in the back of his neck.  He was then told that they got the margins, and he should be fine.

About a year later, he started coughing up blood.  A trip to another doctor revealed he had lung cancer, which was spread from the melanoma that had not been completely removed during the prior surgery.  His family, including his wife of more than 50 years, was told he had six months to live.  Everyone was in shock.  The terribly sad reality was that he didn’t even make it six months.  And most of his remaining time was spent in great sickness.  The last few weeks were a morphine filled, hospice nightmare.

When he was still alive, I just happened to be volunteering at an Orlando medical clinic for the poor, where we had a fantastic dermatologist on staff (also a longtime volunteer).  We discussed my husband’s father’s case, and he really couldn’t believe a dermatologist had missed melanoma.  Melanoma is easily treatable when detected early.  Unfortunately, melanoma is one of the most aggressive and deadly cancers when misdiagnosed, and caught too late.  He said usually the problem is people do not get checked.  For most people, when they get checked, they are fine.  So the numbers of people who die from melanoma anymore are relatively low.

Unfortunately my husband’s family was opposed to any cancer misdiagnosis lawsuit.  That’s really a shame because the only way to stop a bad doctor or hospital, or at least slow them down, is to hit them where they hurt: their pocketbook.

Most cases of cancer misdiagnosis are strikingly similar to the one I just shared.  A patient goes to the doctor complaining of random symptoms.  The doctor should recognize those symptoms as potentially cancer.  But he doesn’t.  Instead he assumes it is something less serious, and sends the patient home.  This can be caused by spending too little time with the patient, being overworked, been too tired, or just being incompetent (not having sufficient training, education or skill to recognize the symptoms).  This causes the patient to lose critical time.  Many of the most effective cancer treatments work best at the earliest stages of cancer. So that window of opportunity is gone when the doctor misses the obvious.

What Questions Help A Lawyer Determine Whether There Is A Good Case Based On Cancer Misdiagnosis?

If a doctor has failed to diagnosis cancer, then whether there is a legal remedy involves numerous different questions, including:

Why An Orlando Cancer Misdiagnosis Lawyer Needs Time To Evaluate 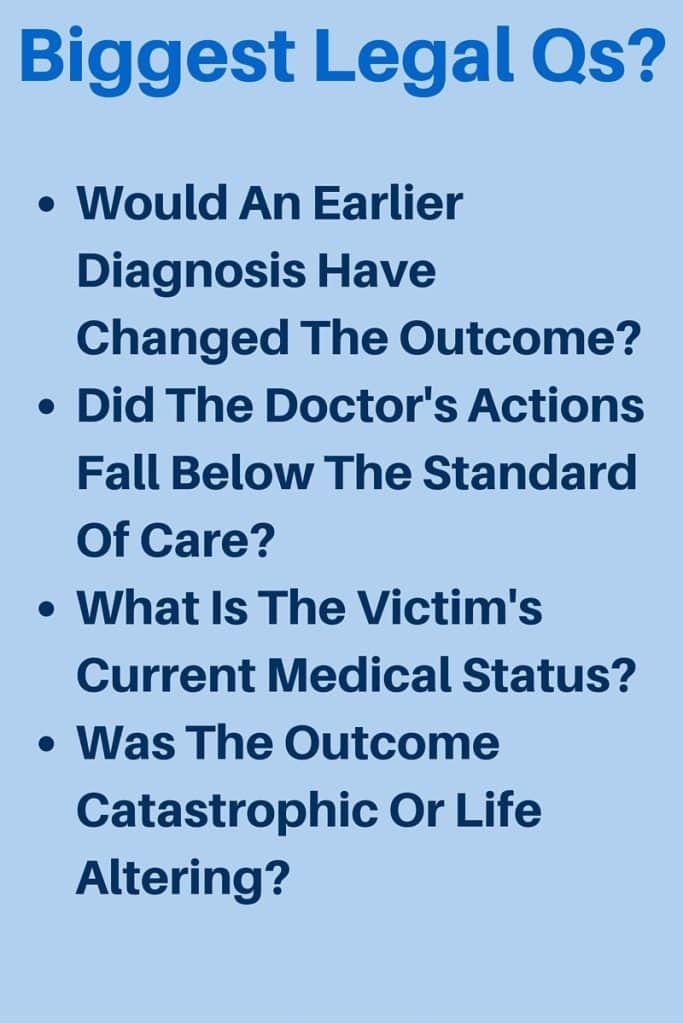 The first step for a Florida cancer misdiagnosis lawyer to evaluate a case is to talk to the victim, or, in the case of a wrongful death, his relatives.  (The procedure is very similar for a cancer misdiagnosis case anywhere in the country, although there are variations in the laws).  We have to learn from the person what the doctor was told, what type of cancer is involved, and what treatments were given.  If it sounds like there might be a viable cancer diagnosis case, then the next step is obtaining and reviewing medical records.  This takes time, and we are unable to do this in every case.  If we believe there might be a good legal case, then we order medical records.  We have to wait to get those back.  Then we have to read them carefully, to determine whether the records support whatever the person has told us.  If the records are consistent, the final step is getting an opinion from another doctor.  Florida requires that we have a doctor give a sworn statement that there was a cancer misdiagnosis, to even file a lawsuit (this is not true in all states).

What Is The Statute of Limitations For A Cancer Misdiagnosis Case?

Should You Handle A Cancer Misdiagnosis Case Without A Lawyer?

This is a crazy, impossible idea.  Handling a cancer misdiagnosis case involves many MANY complicated steps, years of work, and many thousands of dollars.  Experts must be chosen, hired, and paid for their opinions throughout the process.  There are lots of legal hoops that must be cleared before you can even start a cancer misdiagnosis lawsuit. For example, you need that doctor opinion I mentioned before.  Then there are many stages of a lawsuit that require an attorney’s careful time and attention.  Handling a case on your own would simply be impossible.

What If You Can’t Find A Cancer Misdiagnosis Attorney To Take Your Case?

What If You Have A Cancer Misdiagnosis Case Outside Florida?

What Are The Basic Types Of Cancer Misdiagnosis?

The two basic categories of missed cancer diagnosis are: (1) failing to test and therefore diagnose cancer when presented with symptoms that made the cancer possibility clear; and (2) diagnosing a patient with cancer who really doesn’t have cancer.  Either one of those can lead to serious injuries, painful or unnecessary treatments, or even death.

What Happens If Someone Is Diagnosed With Cancer, But They Don’t Have Cancer?

If a patient who doesn’t have cancer is diagnosed with cancer, then they may be put through chemotherapy and radiation, which can have very serious long-term complications for their health.  Additionally, their real medical condition went untreated.  This can lead to serious medical complications, or even death.  The potential legal remedy depends on the treatment that the person received for cancer they did not have (and their physical / health impact on the victim), treatments they missed for conditions they did have, and any other costly or harmful steps taken as a result of the bad cancer diagnosis.

What Cancers Are Commonly Misdiagnosed?

Some commonly misdiagnosed cancers are:

Do You Need An Orlando Cancer Misdiagnosis Attorney?

If you would like to speak with an Orlando cancer misdiagnosis attorney today, please give me a call or text at (407) 383-7290.  I am licensed in Florida and Georgia.  For anyone outside those two states, I still may be able to help you find a lawyer with experience handling these types of cases.

Why You Should Hire Ms. Willis As Your Attorney