Did You Slip & Fall On Trash Or Liquid?

HomeDid You Slip & Fall On Trash Or Liquid?

One somewhat complicated area of Florida’s slip and fall law involves the precise cause of your fall. In short, the precise cause of your fall matters a LOT, in terms of whether the property owner might be liable for your injuries. As an Orlando slip & fall attorney, I always must ask many details regarding whatever caused you to fall before I can accept any slip and fall case. Here’s the reason:

Slipping And Falling On Spilled Substances

If you slipped and fell on something that would constitute a “transitory (temporary) foreign substance,” then the owner MUST have had some sort of notice of the condition before you fell. If the owner or his employees caused the substance to be on the ground (such as an employee dropping liquids), then the owner has something we slip and fall lawyers call “actual” notice. But the owner may also have something called “constructive notice.”

Required Notice To The Property Owner Of The Spilled Substance 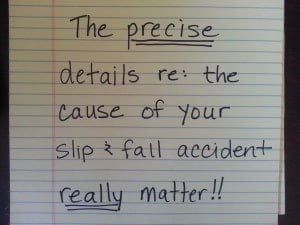 Constructive notice is essentially implied by evidence, including some evidentiary proof of the amount of time that the substance had been on the ground. The classic examples include any spilled substances in grocery or other stores, such as spilled food, liquids or grease. You can prove duration by things like: rotting, smudges (in the spill), stickiness, dirtiness, dustiness, crustiness, streaks, tracks, skid marks, thawing (such as partially thawed frozen goods), a “syrupy” consistency, wilting produce, partial evaporation, appearing “old,” footprints through the spilled substance, or machinery that had been leaking on an ongoing basis . Basically there absolutely must be evidence suggesting the spill was at least 10-15 minutes old (20-30 minutes would be better), or regularly occurred, hopefully supported by the testimony of one or more witnesses including yourself (or at least no witnesses contradicting your own testimony).

How Long Were You Or Your Witnesses Standing Or Sitting Around The Area?

You may also prove duration by the absence of any sounds of spilling or breaking for 10-15 minutes before the spill (for example, if you were standing in the nearby aisles for at the very least 10-15 minutes and you heard nothing drop and break). YOU absolutely have the burden to prove the duration that a spill was on the ground.

For example, in one case, the court found the following evidence to be sufficient to establish a jury question regarding the necessary notice:

However, plaintiff did submit evidence that she and her husband had been in the area of the fall for fifteen minutes prior to the accident; that there were no other shoppers around the area where she fell; that no one swept the floor while they were there; and, at the time of the fall, that there were two store employees in that portion of the store where the accident occurred. Plaintiff’s husband testified that the collard leaf was old, wilted and dirty looking, and that there was water on the floor at the point where plaintiff fell. 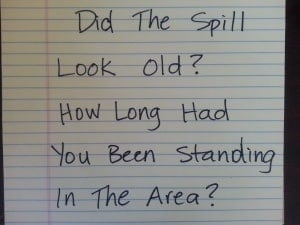 There was no evidence submitted as to how the liquid got on the floor nor how long it had been there. The liquid was described as either water, syrup or Sprite. Enough of a quantity existed so as to expand when pressed upon as a result of Gonzalez’ fall. Gonzalez’ grandson had been in the cafeteria 10-15 minutes before the fall and had neither heard nor seen a spill. We agree with Gonzalez that reasonable inferences could be drawn therefrom that a spill had remained on TCH’s floor for a sufficient length of time to either have partially evaporated or become syrupy, or that the condition had existed for over 10-15 minutes, or even possibly for over an hour, prior to the opening of the cafeteria for the day.

And another court example:

The record substantiates that Mrs. Little stood at the entrance of the aisle for 15-20 minutes and neither observed or heard anyone in the aisle nor heard any breaks or spills. A permissible inference to draw from this is that no one was in that aisle and thus the liquid had to have been there at least 15-20 minutes.

In this case, once the inference has been drawn that no one else was in the aisle for 15-20 minutes, (during which nothing dropped, broke or spilt) there is no other reasonable inference to indulge in than that the liquid was on the floor for at least 15-20 minutes prior to the fall. We consider this time could be deemed sufficient for the defendant to be charged with knowledge of the condition and a reasonable time in which to correct it.

Another court found this combination of facts to be sufficient to have a jury decide the notice issue:

After eating breakfast at the Cracker Barrel, Thoma took three or four steps away from her table when her left foot slid out from under her, causing her to fall. The fall occurred in a common aisle, near the passage from the kitchen to the restaurant. When Thoma got up, she noticed an area 1 foot by 2 feet containing drops of clear liquid. She claims to have slipped on this liquid. Thoma was in the restaurant about thirty minutes before her accident. During that time, she saw no one drop anything on the floor in the area where she fell.

Mr. Leonard McNeal was the only known witness to the fall. He arrived for breakfast about 15 minutes before the accident. His seat was some 12 to 15 feet away from where Thoma fell. McNeal described the area as “a normal area where waitresses would frequently go in and out (the kitchen) door.” McNeal felt sure he saw waitresses carrying beverage pitchers in that area. He did not see any Cracker Barrel customers carrying drinks in the area, nor did he see anyone drop or spill anything.

Was The Puddle Extra, Extra Large?

The size of the puddle may also be some evidence of the time it was on the ground, if the size was very large. For example, one court determined that a deep and large puddle would be good enough to allow a jury to decide the notice question:

Appellants Rolf and Myra Grayson were fare-paying passengers on Carnival Cruise Lines’ “Jubilee.” The Graysons and their friends left the veranda deck and descended to the pool deck via a set of stairs that terminated between 20 and 35 feet from the pool. Some minutes earlier, appellants had observed employees working on the pool and had seen water splashing over the pool’s sides. Mr. Grayson claims he stepped from the stairs directly into a puddle one to two inches deep and approximately six feet by twelve feet in diameter, and immediately slipped and fell.

Was The Business Always Dirty Or Constantly Littered? 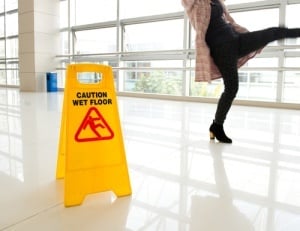 Additionally, the general cleanliness of the store on other occasions before the fall may be a factor, particularly if there is solid evidence that the store or parking lot was constantly littered, or whatever obstacle caused the fall was an ongoing or recurring problem (such as regularly accumulating cash register tapes on the floor).

Had You Or Others Warned The Property Owner Before You Fell?

Prior verbal or written warnings given by others to the property owner may also be enough to satisfy this notice requirement, such as tenants in an apartment complex regularly complaining about a slippery floor. (This is one reason why you should always complain to the owner in writing if you regularly visit or live in any place that you feel has any unsafe condition, and save a copy for future reference!)

Did You Slip & Fall In An Amusement Park, Theme Park, Or Other Crowded Event?

These notice rules might be slightly easier to satisfy if you slipped and fell on a foreign substance at any place of amusement, such as theme parks, race tracks, concerts, large sporting events (such as professional or collegiate football, baseball, or basketball games) or any place where large crowds congregate (note: whether Florida’s newest slip and fall statute has changed this slightly lesser burden in amusement park cases is an unsettled area of Florida law, so in the best case scenario, there would be evidence of the duration of the spill, even at places of amusement).

Did You Slip On A Permanent Part Of The Building Or Property?

If you slipped and fell on something other than a “transitory foreign substance,” such as spilled liquid or other spilled object, then the rules are different. In those cases, the notice requirement is relaxed. However, there still must be something inherently wrong with the property. For example, a code violation in a newer building would be sufficient. We often employ experts to determine whether whatever caused your fall actually violated some set standard. For example, if you believe that you fell because a parking lot had improper lighting, then we would need to consult a lighting expert to determine whether the lighting fell short of established lumen (lighting) standards.

As you can hopefully understand, if you call me, and you slipped and fell in a business establishment, then I will have lots of questions about the details surrounding your fall. However, you are welcome to call or text me anytime, and I will help you determine whether the property owner might be liable for your slip and fall accident.

Things You MUST Do After A Slip & Fall Accident

How To Increase The Value Of Your Slip & Fall Case