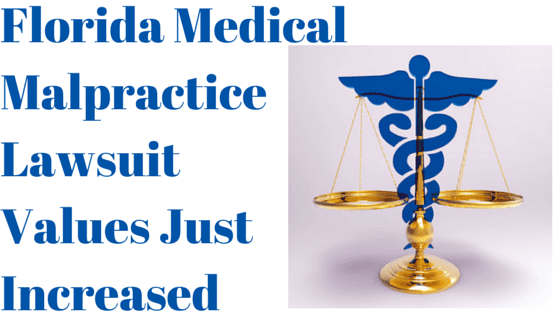 For many years, Florida had something called a “cap” on certain types of damages in medical malpractice cases.  The caps applied to “noneconomic” damages, which meant damages that weren’t financial.  These included money for things like pain and suffering, emotional upset, inconvenience, bodily disfigurement, or just plain loss of enjoyment of life.  These are different than economic damages, which includes things that are easier to calculate, like your past and future medical bills, and lost wages.  The Florida legislature passed this grossly unfair law because they didn’t want doctors to pay as much as they should for causing medical negligence victims to suffer.

Well, that all began to change for the better in 2014.  Florida’s highest court, the Florida Supreme Court, decided that the caps on noneconomic damages were unconstitutional, but only in wrongful death cases.  Although many medical malpractice attorneys began assuming that lower courts in Florida would apply the same logic to non-death med mal cases, that was never guaranteed.  The Florida Supreme Court had specifically limited their holding to wrongful death cases.

On July 1, 2015, Florida medical malpractice victims won another important victory in this legislative / judicial battle.  An appellate court below the Supreme Court (from one of 5 districts in Florida) ruled that the caps on non-economic damages also shouldn’t apply to personal injury medical malpractice cases.  In other words, the court decided that even if the victim didn’t die, there still shouldn’t be caps on their potential damages.

This can mean a lot of money.  The statutory caps range anywhere from $150,000 to $1.5 million, depending on the type of injury, and the particular defendant.  Those caps can be grossly unfair to a medical malpractice victim whose life was completely destroyed by medical negligence.  Before this ruling, the only real money they could recover under this outrageous statute was the value of past and future medical treatment, and lost wages.

A lower appellate court down in the Palm Beach Area issued this ruling (that is, removing the caps in ALL medical malpractice cases, not just wrongful death cases).  Most Florida med mal & personal injury lawyers expect the same future rulings across the state.  But it is possible that other lower appellate courts around the state could have a different opinion, in a future similar case.  Lower appellate courts do not have to follow each other.  That potentially could create a legal conflict that the Florida Supreme Court would have to resolve.  And resolving that conflict could take several more years, and is never guaranteed to go our way.

Still, this is undeniably a victory for medical malpractice personal injury victims, who have long deserved more than Florida’s med mal statute gave them.

In this particular case, the victim had gone into what should have been a routine surgery for carpal tunnel syndrome.  During surgery, the anesthesiologist perforated, or cut open, the plaintiff’s esophagus.  She woke with terrible pain in her chest and back, but was sent home after testing revealed no heart problems.  The next day, her neighbor found her unresponsive, and rushed her back to the hospital.  She needed emergency surgery, then was put into a medically induced coma for several weeks.  She later needed additional surgeries and intensive therapy to regain mobility, and begin eating and living again.  She now reports having terrible pain in her chest, various physical limitations, and severe emotional distress because of the trauma, and her loss of life independence.

The jury decided that she was entitled to just a little over 4.7 million, but 4 million of that award was for past and future pain and suffering.  In other words, she only had roughly $700,000 in actual medical expenses.  Again, that medical expense award was needed to pay her actual medical expenses. So there was little actual financial compensation to her (as opposed to her medical providers), despite her being catastrophically injured by a gross surgical error.

After the trial, the defense lawyers filed motions, to get the judge to substantially reduce the 4 million in pain and suffering damages, even though that’s the amount the jury fairly thought she should have received.  The appellate court explained:

(The sovereign immunity cap will still be in play when this case returns to the trial court, which is yet another plaintiff injustice in Florida’s laws.)

One Step In The Right Direction For Florida Medical Malpractice Victims

Before this ruling, this Florida medical malpractice victim would have only been entitled to recover for her past and future medical expenses (and her past medical providers, and health insurance company, would have been reimbursed from her verdict award, thus substantially reducing the money in her pocket).  We know the jury decided the total value of her economic damages was only $700K.  A hefty portion of that award, or all of that award, would have been needed to pay or reimburse her medical providers and health insurance company for her various surgeries, and whatever future therapy, life care, or treatments she needed.  In other words, without the additional pain and suffering damages, there would have been little to no actual compensation for the profound, nearly life-ending emotional and physical losses she clearly experienced.

The bottom line is that this will positively impact Florida med mal settlements, and litigation strategies, going forward.  But the sad remaining fact is that Florida’s med mal statute still has far too many hoops for plaintiffs and their lawyers, most notably the need for expensive medical testimony & opinions, and the limits on recovery for wrongful death family members.  So we still very sadly must decline the vast majority of these cases, although the window is a tad bit sunnier in Florida today.

What Is Your Medical Malpractice Case Worth