411 Pain, Ask Gary & Other Lawyer Referral Services: Do They Have The Best Orlando Personal Injury Attorneys? 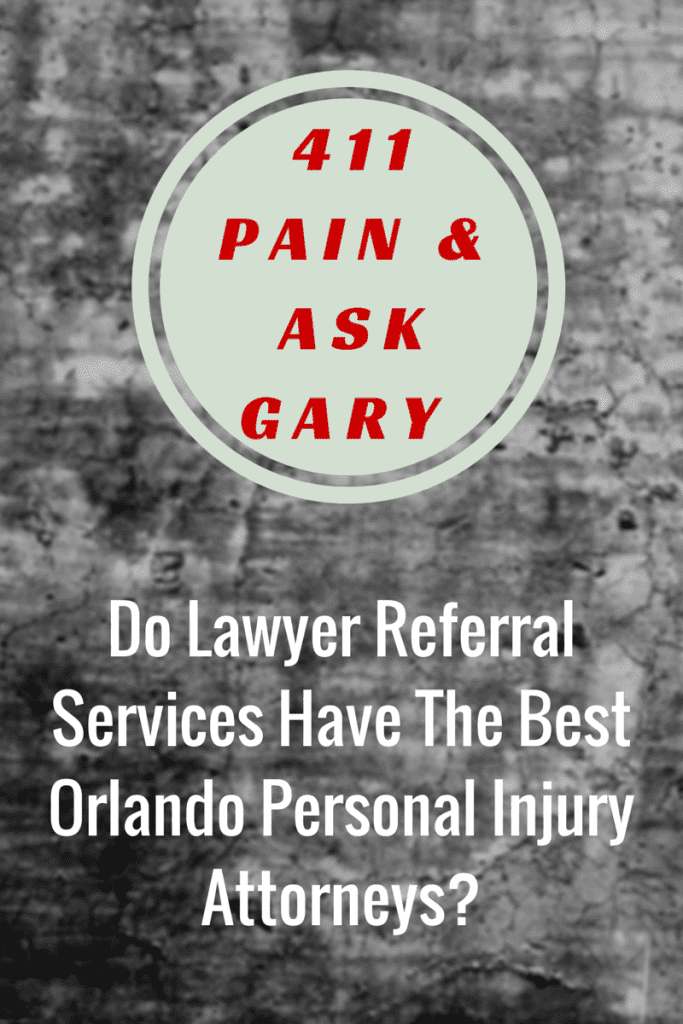 Many people who’ve just had a car accident, motorcycle accident, or truck accident, naturally want to find the BEST Orlando personal injury attorney.  They might see some of the billboards or other advertisements for 411 Pain, “800-Ask-Gary,” or other lawyer referral services.  Then they might wonder: do these lawyer referral services somehow have the BEST Orlando personal injury attorneys in their network?

As an Orlando car accident attorney, I cannot imagine how potential clients must feel with all of the billboards, and television ads, from all attorneys, and now these lawyer referral services.  The choices would seem to confuse even the most sophisticated consumers.  My car accident clients range from very sophisticated with legal and business matters, to simple people just wanting good service, aggressive representation, and fair results.  Still, based on their questions, my impression is that they really don’t know what factors they should consider when hiring an attorney.

I have recently begun seeing more 411 Pain billboards and other advertisements around Orlando.  And I just now watched one of the 411 Pain commercials for the first time ever:

I hope no potential injury clients would be persuaded by a memorable jingle, to believe that they are getting the best Orlando car accident attorney.

In any event, because they seem to be advertising more in Orlando, I thought consumers might want to know that there has been a lot of news about 411 Pain, 800-Ask-Gary, and other Florida lawyer referral services.  These reports have spanned several years.  As a result, the Florida Bar has been investigating, and there has also been some legal action.  You can read more about these developments in the links below:

So, bottom line, the Florida Bar and Florida Supreme Court are still wrestling with how they should manage law referral services, including 411 Pain & 800-Gary.  In other words, this issue is still unsettled in our state.

In the meantime, the important thing for any consumer to understand is that, if you call 411 Pain, or 800-Ask-Gary, you will be calling a lawyer referral service.  The attorneys in their network have no special skills, or expertise.  These non-lawyer referral services are simply businesses, sending callers to lawyers in their network.  Here is a news report about their services:

By the way, at the end of that 411 Pain video, the newscasters gave VERY bad advice.  One said you should call your insurance company first, after an accident.  Another even said that the insurance company would refer you to a lawyer.  While your own insurance company may require you to report any accident, calling them first is very bad idea. They want to pay you as little as possible.  So they have LOTS of tricks to get you to say something that will later hurt your case.  Even without a recorded statement, insurance adjusters may use what you say against you during settlement discussions.  You should never deal with an insurance company without an attorney.  Instead, your first call after 911 should be the attorney of your choice.  Consultations are free, so why wouldn’t you?

Personally, I don’t understand why injured accident victim would call a lawyer referral service, rather than an actual law firm or lawyer.  I also think injured accident victims should avoid hiring settlement mill personal injury law firms.  If you were injured during an accident, I strongly believe that the best thing you can do is to call an Orlando personal injury lawyer who will hear the facts of your case, then give you tailored advice based on whatever happened to you.

If you call or text me, then I will do my very best to help you get the most money possible.

How Much Do Car Accident Attorneys Charge?

Why You Should Never Deal Directly With An Insurance Company