How To Fire Your Florida Personal Injury Attorney

Can You Fire Your Florida Personal Injury Attorney? 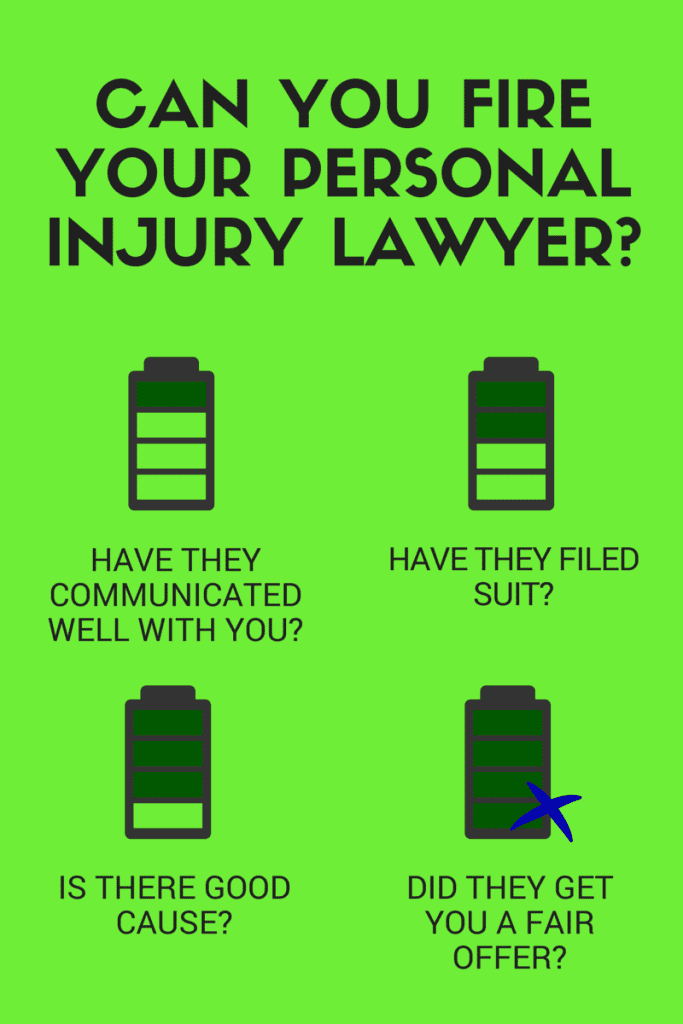 The answer is yes, as this Florida Bar consumer pamphlet explains, you can always fire your lawyer.  The question is whether you should.

For starters, if I do not believe that the personal injury attorney has done anything wrong, then I will not recommend that the person terminate his or her lawyer.  In other words, if someone asks me that question, I give an honest answer.

Last week, someone called to ask whether he should fire his lawyer.  He was unhappy with the offer he received to settle his case.  I had to tell him that I couldn’t get him any more money.  The reason was that he had completely healed from his injury, and had no permanent scarring.  No lawyer would be able to get him much money.  We only accept questionable injury cases from the beginning because we don’t yet know the extent of any potential client’s injuries.  In other words, most good lawyers wouldn’t even accept a no injury / no scarring case, if they had some way of knowing that fact from the beginning.  I sure wouldn’t.  The reason is that completely healed injury cases often have very little value.  So we accept unknown injury cases only because a doctor might later discover that they had an invisible but serious injury, such as a herniated disc in their back.

I received another call recently from a woman whose lawyer told her he couldn’t get a much higher offer unless she had injections or surgery.  Again, based on her existing offer, injuries, and treatment, I agreed with her lawyer, so recommended that she stay with him.

In many other cases, people have called me, and been unhappy that their lawyer would not return their phone calls, or answer their questions.  Often those same people have doubts about their lawyer’s competency, based on the lawyer’s actions during their case.  (Many times the complaints have been that their lawyer has done nothing for an extended period, sometimes years.)   In those cases, quite often, I think the person should seriously consider hiring a new personal injury attorney.

I have one client whose former personal injury lawyer repeatedly referenced a completely different type of accident in several letters to the insurance company.  I read the letters.  They were clearly form letters.  The Orlando law firm had changed nothing about the letter, other than switching the clients’ names, and social security and claim numbers.  The problem was, again, the letters didn’t even describe the right kind of accident.  (The letters said she had been in a car accident, but her accident had nothing, at all, to do with driving or cars.)  In other words, the lawyer’s lack of competence and/or carefulness was clear from the documentation.

I had another new client recently whose lawyer kept offering low settlement amounts, in a fairly serious injury case.

I had yet another new client recently whose former personal injury lawyer refused to file suit, which is a common problem with settlement mill law firms.  But I felt that she could get a lot more money from having a lawyer who would file suit.

All of those potential clients had witnessed legitimate red flags about their former lawyers’ work and competency.

Pros And Cons To Firing Your Personal Injury Lawyer

If the lawyer has done someone wrong, the next questions revolve around whether a new personal injury lawyer could do any better, and whether the former lawyer will have a strong lien claim.

If you fire your personal injury lawyer without good cause, then he or she will be entitled to place a lien on your case settlement proceeds for the reasonable value of the work performed, up to the amount of the fee he could have collected under the contract.  That might sound scary.  But the definition leaves a lot of wiggle room, and ways to help you avoid paying your former lawyer very much money.

(Exception: you may fire your lawyer for any reason, with or without good cause, during the first three days after signing the contract, and would owe nothing other than any costs the lawyer advanced for you.)

Whenever someone calls me wanting to fire their personal injury lawyer, my first question is what the person thinks their lawyer has done wrong. The next questions are things like what is the stage of the case?  Has the lawyer filed a lawsuit?  If so, what has happened during the suit?  Also, have their been any settlement offers? If so, how much?

How & When To Fire Your Personal Injury Lawyer

If your current personal injury lawyer hasn’t done much work, not filed suit, and not received any offers, then chances are that his future lien will be very low.  If there appears to be good cause for firing the former lawyer, then the best way for the client to fire the lawyer is to write a letter, certified receipt / return requested, telling the lawyer everything he did wrong.  However, the client should never write this type of letter without assistance from another lawyer.  (If I believe the person should fire his lawyer, and I am willing to take the case, I will help my new clients draft this letter.)  Writing a letter explaining the reason for firing your current lawyer is never a guarantee that the lawyer will not be able to collect on any lien.  But this type of letter can help a lot in the future with any lien payment negotiations between the former lawyer, and the new lawyer.

The reality is, if you fire your personal injury lawyer, and hire a new one, then your former lawyer’s lien just becomes one of many to be negotiated (just like your medical and health insurance bills).

If the lawyer either didn’t do much work, or was fired for what seems like good cause, then your new lawyer has a strong argument against your former lawyer that their lien should be resolved for very little money.  Therefore, usually the risk of getting too little money for a moderate to high value injury or accident case, if the lawyer is not doing his job properly, outweighs the risk that the former lawyer will try to get more money for his lien.  On the other hand, if your former lawyer has already done a lot of work, done nothing wrong, or already received a good value offer on the case, then negotiating his future lien would be much more difficult, so less of a good idea.

Since there are so many factors involved, the best solution is to call another lawyer, and get a second opinion.  I strongly discourage anyone from making such a serious decision without talking to another lawyer first.

Other Posts Recommended For Accident Victims:

Top Ten Ways To Get The Most Money From Your Case

How Settlement Mill Firms Escape Scrutiny From Judges & Everyone Else

Why You Should Hire Tina

Tina Willis is a serious injury, accident & death lawyer, based in Orlando, Florida, although she accepts cases throughout the state of Florida, and in Georgia, where she is also licensed. She vigorously prosecutes serious injury and death cases caused by auto accidents, semi-truck accidents, slip and fall accidents, products & premises liability cases, as well as medical malpractice.